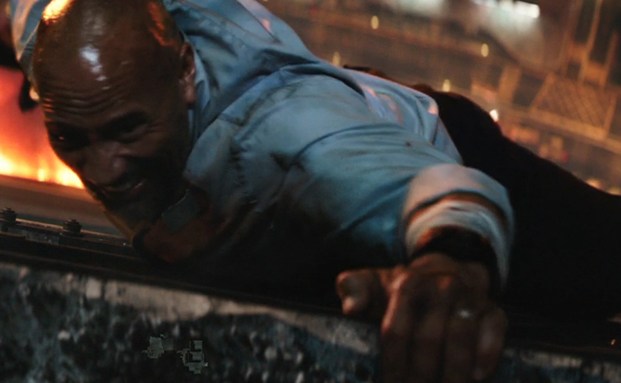 Think The Towering Inferno meets Die Hard meets the Rock. That about sums up everything you need to know about Skyscraper, a ludicrously entertaining stunt- and CGI-laden vehicle to further prop up Dwayne Johnson’s status as the world’s No. 1 action hero.

In just the past seven months we have watched him take on the jungle in the smash-hit Jumanji sequel, fight off monsters to save Chicago in Rampage and now scale the world’s tallest building, the 260-story Pearl in Hong Kong – and do it all with an easily attachable and detachable prosthetic leg. Take that Stallone, Schwarzenegger, Willis, Cruise and all those other aging action heroes who made this kind of thing their bread and butter but didn’t have to do it with one leg tied behind their back. I have to say, for sheer audacity and roller-coaster thrills, Johnson outdoes anything they ever did, even if there isn’t an ounce of credibility and he has to put up with stiff, by-the-numbers dialogue that sounds like it would be right at home in an old English-dubbed version of an Asian monster flick. It doesn’t matter because, as incredulous this all might be, Johnson’s single-minded heroics save the day, and this picture.

Writer-director Rawson Marshall Thurber came up with the not-so-original story in which Johnson is Sawyer, a former FBI hostage negotiator whose leg was blown off during an encounter with an unhinged former colleague wearing a suicide vest. He is healed back to life by an understanding nurse and former combat medic (Neve Campbell), whom he marries and has two adorable twin kids with. They accompany him on his latest job as a security expert brought to Hong Kong to lock in and check out final security details for the opening of the Pearl. As such they are the only residents in the entire place when a group of bad dudes decides to upend everything and destroy the building before it can even open. Their goal apparently is to get some sort of drive from the main architect of the building and seemingly will stop at nothing to get it.

There are others involved in the plot including a take-no-prisoners woman who causes havoc at every turn as well as other colleagues of Johnson’s who all seem hellbent on using him to their own wretched ends. All of the baddies are one-note cartoon villains who only serve as foils for Johnson’s exhaustive histrionics, which include a kick-ass martial arts fight with one of those colleagues in which he literally kicks ass with — and without — a leg to stand on. Once the inevitable hostage-taking of his wife and kids gives him superhuman motivation, he finds himself flying through the air into an open broken window of the burning 96th floor, making a makeshift bridge with a piece of wood for his wife and son to perilously cross as flames engulf them miles above the ground. He also scales floor after floor with only his hands (of steel, apparently) and basically uses that prosthetic leg as a weapon of mass destruction as he sets out to save his family from constant peril.

The best bit is saved for last in a nifty virtual-reality showdown on the rooftop of the building in which he engages the baddies in a cat-and-mouse game in a modern version of a hall of mirrors. I will give Thurber the credit to say this sequence is an homage to the famous mirror sequence in Orson Welles’ 1947 classic The Lady from Shanghai. It worked then, and it works now as something not seen before in this kind of summer popcorn movie.

As for the acting, Johnson does his thing with his usual flair, though this time the script doesn’t provide him with the kind of witty, self-deprecating repartee he normally traffics in for these big-scale movies. Campbell, in a return to movies, acquits herself nicely in the role, albeit also straining credibility throughout including in an elevator ride that gives new meaning to the words fast and furious. The kids (Noah Cottrell and McKenna Roberts) are alternately cute and terrified. Pablo Schreiber has his moments as Ben, Sawyer’s friend -turned-enemy, as does Asian superstar Chin Han as the man behind the Pearl. In fact it is clear from the casting that China is the key target market for this film’s box office hopes, and with Legendary behind it, that is not a surprise.

Thurber, best known for comedies like the underrated We’re the Millers (waiting for a sequel to that one), Dodgeball and Johnson/Kevin Hart vehicle Central Intelligence, gets most of the laughs unintentionally this time but navigates the daunting logistics of this enterprise with the skills of a sharpshooter. Production values are first-rate in this dumb, fun thrill ride. Producers are Beau Flynn, Hiram Garcia, Thurber, and Johnson. Universal opens it Friday.

Do you plan to see Skyscraper? Let us know what you think.