Continue to Deadline SKIP AD
You will be redirected back to your article in seconds
Skip to main content
August 17, 2020 5:58pm
3Comments 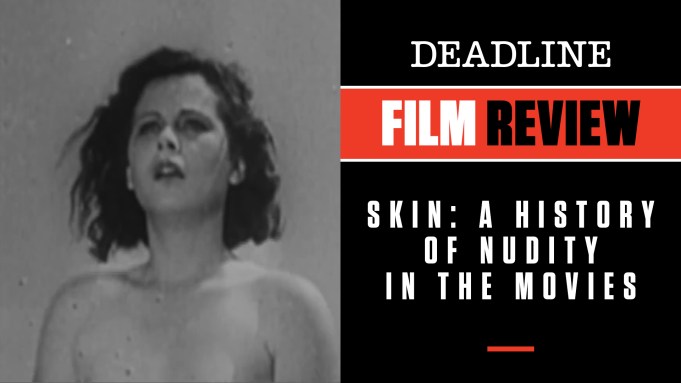 If you look at the credits behind the exhaustive and exhausting new documentary Skin: A History of Nudity in the Movies, you can get a pretty good idea of what’s in store. Director Danny Wolf is best known for his docu Time Warp: The Greatest Cult Films of All Time. Among screenwriter Paul Fishbein’s claims to fame is creating the Adult Video News Awards. Executive Producer Jim McBride is founder and mover and shaker behind the website Mr. Skin, which chronicles in detail every scene involving nudity ever, even serving as a database for the exact moments those scenes occur.

So it might dawn on this trio that it is time someone did the ultimate exploration (if not exploitation) of all things nudity in motion pictures. If you are a completist who wants to know — and see — everything on the Great Undressed for the last 100 years of movies, and even earlier, this is nirvana for you and one history lesson you don’t wanna miss.

Covering the waterfront, this is one of those docus that feels it has to be the ultimate guide, even though, at an overlong 127 minutes, all the countless talking-head interviews, interspersed with a mountain of clips, becomes almost overwhelming to take in. Silent films, nudies, mainstream, foreign, teen movies, gender bias, censorship, MPAA ratings, and ever-so-briefly, the #MeToo movement and stars from Marilyn Monroe to Bo Derek are just a few of the areas on view as this academically structured enterprise takes us decade by decadent decade through the history of nude scenes. It was near the two-hour mark when the card for the 1990s popped up and I looked at my watch. Oy. When does this parade of bodies ever stop?

To be fair, it is clear the filmmakers love this topic, and with some really choice and entertainment interviewees, some of it really pops as a primer on the subject. Those interviewed include McBride himself, who almost gleefully describes the disrobing that became his beat in life. Clearly, they have spent a lot of time putting this all together; the clip clearance alone must have been a monster since I doubt certain major stars would want to highlight this part of their careers, and the stories are priceless in some instances.

Tops among those sharing the secrets of their nude scenes is Malcom McDowell, who hilariously describes his unclothed work in If…, A Clockwork Orange and Caligula. Mariel Hemingway talking lesbian scenes in Personal Best and going against type to play Playboy Playmate Dorothy Stratten in Star 80 also is very good, as is veteran Mamie Van Doren, Linda Blair, Pam Grier, Shannon Elizabeth and many others including, improbably, 300-pound Borat co-star Ken Davitian, who describes in outrageous detail his willingness to go all in by going all out.

Particularly poignant, eye-opening and harrowing is the account of low-budget flick star Erica Gavin, who became so unhinged at the sight of her body in all its wide screen glory that she nearly committed suicide after seeing it. Although the film tries to pack too much in, and tends to cover too many inconsequential movies along with the likes of worthy entries like X-rated Best Picture Oscar winner, Midnight Cowboy, you have to give the filmmakers at least credit for recognizing some good soundbites, and indeed they serve them up at a quick pace to be sure.

There is a lot here to unpack and the filmmakers have the smarts to let a number of true experts, mainly film historians, unpack them. You only wish the dizzying overall result offered some real analysis of the meaning of it all and the impact going forward as the business is being upended in the age of MeToo. Clearly this was in the works as that all happened because the only real attention paid to it is a brief moment at the very end as the movie rushes like a freight train past the last 20 years. Also, even though it is so densely full of movies to talk about, it is pretty astounding to see no mention of Kubrick’s seminal Eyes Wide Shut, making me wonder if its stars did not give permission for clips since his Clockwork Orange is given ample coverage here. And considering its outsized reputation as a major player among teen nudies, I was surprised that Porky’s is given such short shrift in the scheme of things. And also considering director Wolf’s past job working with latter-day Candid Camera projects with Allen Funt, there is not a single mention of Funt’s notorious X-rated big-screen What Do You Say to a Naked Lady? Maybe they are saving it all for the sequel.

Quiver releases it tomorrow on VOD. Check out my video review (I just know you will on this one) to see scenes from the movie.

Do you plan to see Skin: A History of Nudity in the Movies? Let us know what you think.