Continue to Deadline SKIP AD
You will be redirected back to your article in seconds
Skip to main content
January 28, 2019 2:02pm 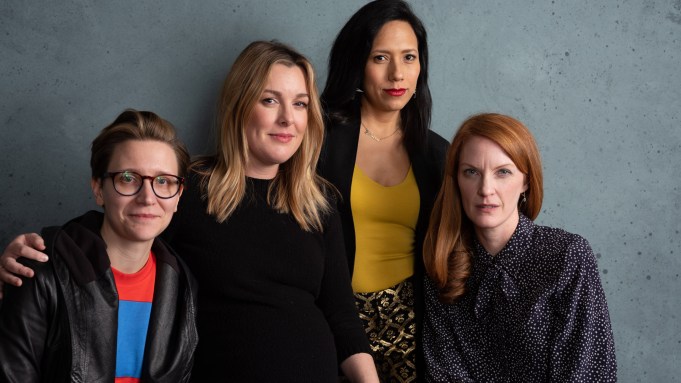 Based on the real-life account of 1920s Pentecostal evangelist and media sensation Aimee Semple McPherson, the largely fictionalized Sister Aimee follows Aimee who, looking for a way out, orchestrates her disappearance and heads to Mexico with her lover, a married writer named Kenny. On the way, they meet a courageous guide named Rey, who joins the couple on a wild road trip to the border.

“We thought it would be an opportunity to fictionalize and talk about female identity, narratives and how they are usurped, and the power of storytelling and the spectacle which she embodied,” said co-director Samantha Buck, who was joined at Deadline’s Sundance studio by co-director Marie Schlingmann and stars Anna Margaret Hollyman and Andrea Suarez Paz.

Despite the mostly made-up plot, “I think that there’s something in her character that we hope is truthful to who she was not necessarily what exactly happened but who she was and what kind of influence she’s had over the last century,” said Schlingmann.

“The movie is a dark comedy. It is this mashup of screwball and Western and musical and all of these things,” added Buck. “We wanted to have wording in the beginning that allowed the audience to know — mostly people who know Amy and know her story — that we are not doing a biopic” and also “to have a little fun with it in the language to tip the hat to the audience the kind of movie and experience they’re going to have.”

Check out the interview above.