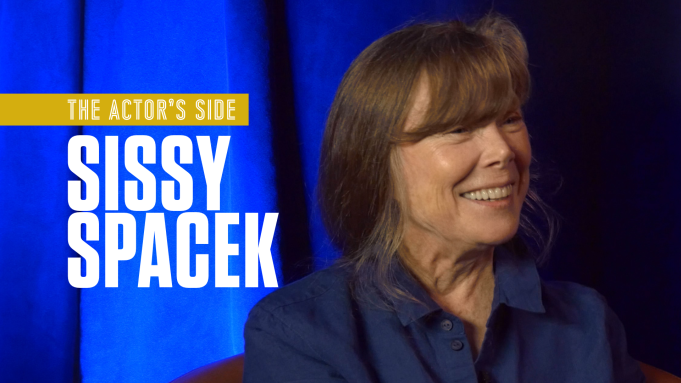 She may have started out modeling, and to be a musician , but the acting world and film fans are grateful she didn’t stop there because Sissy Spacek has blessed the movies with a career of brilliant performances that have resulted so far in numerous classics, awards, and six Oscar nominations starting with her first for her immortal Carrie in 1976 , and continuing with memorable roles in the likes of Missing, The River, Crimes Of The Heart , In The Bedroom , and of course her Best Actress winner as Loretta Lynn in Coal Miner’s Daughter from 1980.  Spacek has always had a musical bent so it’s no surprise she did her own singing in that one, rather than lyp synching to Lynn’s records. But it was just one of a long list of impressive performances leading up to her most current role opposite Robert Redford in The Old Man And The Gun, the movie Redford is saying will be his last as an actor.  If it is , then what a way to go out.  I ask Spacek about that declaration as well as working with Redford and director David Lowery  in today’s episode of my Deadline video series, The Actor’s Side.  She stopped by our studios for a chat that included talk of her early days,  her first record (made under a different name), her favorite movie (Hint:  it’s an early one),  and what lessons she learned from Jack Lemmon.  Spacek is a wonderful guest and you will see why just by clicking the link above to watch our conversation.