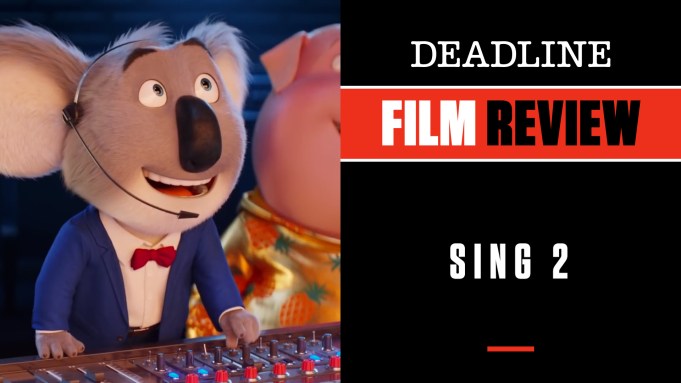 Well, just as Omicron threatens to torpedo our holiday comes the perfect antidote, a bright lively musical animated sequel to 2016’s delightful Sing. If the original was all about chasing your dreams, this edition is all about seeing how far you can take them.

Do we believe? Yes, we do, at least in this “hey kids let’s put on a show” story circa 2021. It worked five years ago when Illumination and Universal unleashed the first one on the world in the wake of success of shows like American Idol and The Voice which populated our TV screens with hordes of musical dreamers in search of stardom. The conceit actually works even better now, especially since none other than Bono is part of the mix this time.

Sing 2 once again follows the ever-hopeful Buster Moon (Matthew McConaughey). He and his friends have found success in their own little corner of the universe with the New Moon Theater. But now his dreams have grown and he is hatching a plan to take their act to a much more imposing venue, the Crystal Tower Theater in Redstone City. In other words: the big time.

The only catch is that the somewhat frightening proprietor, Jimmy Crystal (Bobby Cannavale) is having none of it until Buster convinces him he is good friends with the legendary and now reclusive Clay Calloway (Bono in his animated feature debut) who basically quit the business ten years earlier when his wife died. Jimmy sees the possibilities when Buster promises he can get Clay to join the troupe. The only catch is Buster doesn’t know Clay at all, but that won’t stop this dreamer from making it his mission to deliver on the promise.

Things get complicated from there including Jimmy’s insistence that he drop Rosita (Reese Witherspoon) in favor of his no-talent daughter Porsha (Halsey), who hilariously chews the scenery.

Of course all the lovable regulars are back including Ash (Scarlett Johansson), Johnny (Taron Egerton), Keena (Tori Kelly) and Gunter (Nick Kroll), who convinces Buster this is all a good thing. Pharrell Williams as Alfonso and Letitia Wright as Nooshy are among the new and welcome additions to the Sing universe.

Musically, that universe is better than ever with a great selection of contemporary hits and the entire cast is up to the task in style. This time there is a sweet bonus with a brand new U2/Bono tune “Your Song Saved My Life,” which really soars.

Director Garth Jennings is also back and expertly delivers exactly what fans expect. This is a real holiday confection and, pandemic be damned, should hopefully provide a nice respite for the season.

Producers are Illumination’s Chris Meledandri and Janet Healy. Universal releases it Wednesday exclusively in theaters. Check out my video review with scenes from the film at the link above.

Do you plan to see Sing 2? Let us know what you think.