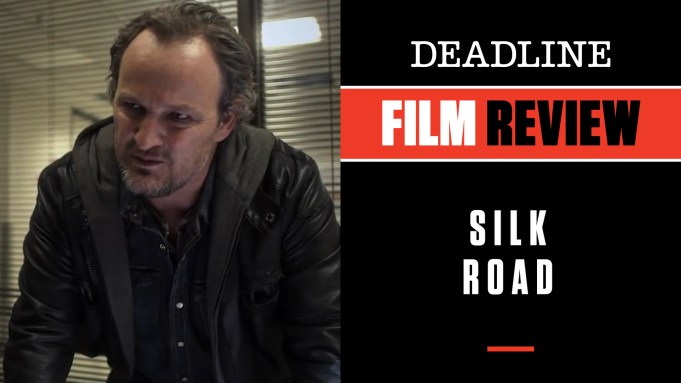 If Silk Road wasn’t a true story, some Hollywood screenwriter would have to create it because this is pure gold material as a movie. And actually it is true, or largely, even though the opening credits warn us that it is based on real events other than what the filmmakers “changed or made up.”

In what might be the most laptop-centric film since The Social Network, writer-director Tiller Russell’s narrative feature debut centers on Ross Ulbricht (Nick Robinson), a 26-year-old college grad whose Libertarian obsessions led him to create Silk Road. The dark net website offered illegal drugs for sale through the Tor technology that allowed users’ IPs and identities to be invisible and payment through Bitcoin so the money trail cannot be traced. Thus, the USPS, Amazon, FedEx and others unwittingly were delivering drugs directly to user doorsteps from the first website devoted to their sale. For two years from 2011 until 2013, when Ulbricht finally was brought down by the DEA and FBI and worth $28 million at the time, this guy had everyone outsmarted, with only the help, virtually, of one “employee,” a somewhat nutso webmeister named Curtis Clark Green (Paul Walter Hauser in a scene-stealing role).

Except, that is, for one somewhat disgraced DEA agent named Rick Bowden (Jason Clarke), who stumbled onto this world while relegated to a basement desk job he was shuffled off to, a year away from his pension at the DEA after botching a big assignment. With the help of a small-time criminal Rayford (Darrell Britt-Gibson), this grizzled, unscrupulous and internet-challenged agent — who doesn’t seem to grasp even how to send emails correctly — was able to follow the digital footprints of Ulbricht while at the same time outsmarting his superiors, but getting in a whole lot of trouble with his secret sleuthing.

Although there have been a couple of documentaries on the Ulbricht story already, and Russell himself is a documentarian currently represented on Netflix with Night Stalker: The Hunt for a Serial Killer, the director decided quite correctly that this material also was uniquely made for the Hollywood treatment, and boy does he deliver. This is an edge-of-your-seat tale of an average guy with a whale of a Jeff Bezos-style idea to create a free market on the web for drug deals, rather than forcing consumers into back-alley purchases. He figured those with the smarts to use Tor and Bitcoin would not be the kind of criminal element that cartels deal in, and it could be as innocent as buying shoes on Amazon. For a while, it worked — but as the film deftly shows, it all turned into an obsession for Ulbricht as this “smartest guy in the room” gets in way over his head, with top government officials like Sen. Chuck Schumer going on TV calling for the immediate capture and shutdown of Silk Road. It is a digital cat-and-mouse game for much of this thriller’s two-hour running time, with one fascinating detail after another piled on as Bowden uses his underhanded methods to close in on his prey, in the process getting so caught up in his pursuit that he becomes part of the problem as he becomes too close to his target.

There are elements of other films here, everything from John Schlesinger’s The Falcon and the Snowman to Alan Parker’s Midnight Express and especially David Fincher’s The Social Network, but Russell has taken his own path, perhaps playing with the complete truth or admittedly ignoring some facts of the case to paint a portrait of a young man lost in his political belief that Americans have every right to have anything they want, and that he was providing a service. The human toll of making deadly drugs so easy to acquire is mentioned but glossed over in such a way as it is hard to understand how Ulbricht, ultimately charged with money laundering, computer hacking and drug trafficking, received two lifetime sentences plus 40 years without possibility of parole, especially since no one was murdered as a result of hit jobs Ulbricht is seen ordering (at least in the movie version) as it all comes unraveled. The legal cases and appeals are lightly touched on, but the core telling of how it all could go so wrong is told with great skill, and like I said a Hollywood movie just waiting to happen.

Robinson, with sullen intensity, is excellent, and Clarke has the role of his career to date — his own “Popeye Doyle” — and he plays it for all its worth. Jimmi Simpson and Will Ropp as agents on the trail, Daniel David Stewart as best friend Max, Alexandra Shipp as Ross’s increasingly frustrated girlfriend Julia, and Katie Aselton as Bowden’s wife are all very good in support. Hauser and Clarke run away with it, though.

Russell’s final scenes infer the filmmaker might be using this movie to engender some sympathy and perhaps future legal recourse for Ulbricht, who has seen his appeals exhausted all the way to the Supreme Court and a failed attempt at a pardon from Donald Trump, but that aspect is less interesting than how and why this all could happen in the first place.

Producers are Stephen Hans, David Hyman, Duncan Montgomery, Alex Orlovsky and Jack Selby. Lionsgate sends it out Friday – digitally, of course. Check out my video review with scenes from the film at the link above.

Do you plan to see Silk Road? Let us know what you think.