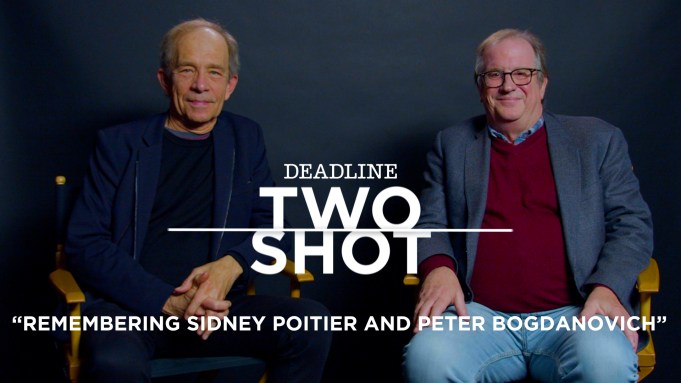 Editor’s note: Deadline presents the fifth episode of Two Shot, a video series in which Pete Hammond and Todd McCarthy tackle the artistry of films. Each has reviewed and written about the craft for decades and built a remarkable breadth of knowledge of films past and present. What we hoped for when we asked them to do this was a concise, mature, thoughtful conversation comparable to what we saw when Roger Ebert and Gene Siskel were alive.

This week we remember two highly influential and extraordinarily successful filmmakers who sadly left us late last week: Sidney Poitier and Peter Bogdanovich. The latter had a significant impact on McCarthy’s own career as he explains, and Poitier was simply a historic and towering presence in the industry and the world.

We share our thoughts on both, but first we dive into the depressing effects of the pandemic on the business, and particularly the festival circuit and the movie-awards season which is such an important part of promoting and keeping adult-targeted smarter movies alive. Will the pandemic, and now Omicron in particular, kill these films off once and for all? Theatres seem only to be doing business for superhero fare, awards shows are being postponed, canceled, or in the case of the Golden Globes wholly ignored, while festivals like Sundance are forced to again go virtual which may lessen their impact in promoting the kind of independent smaller films so dependent on this kind of attention.