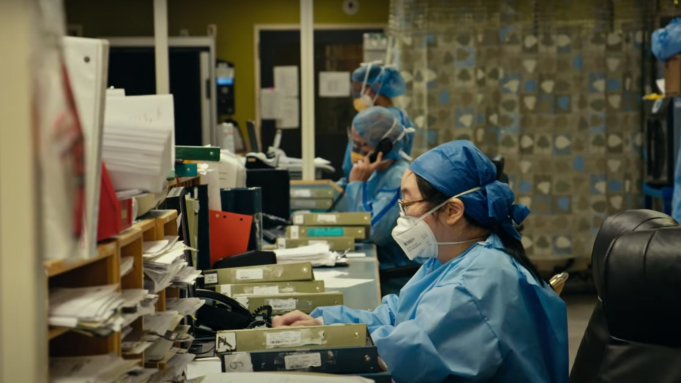 The devastating speed with which COVID-19 can kill people is highlighted in the latest episode of Showtime’s documentary series Vice.

The seventh episode of the series, which is produced by the youth-skewing media company, sees Vice correspondent Gianna Toboni talk to front line healthcare workers at Hudson Regional Hospital in Secaucus as they grapple with the virus.

“When it goes bad, it goes bad quick,” says one nurse. “That’s the problem.”

As you can see above, even the doctors and nurses are surprised by how quickly patients can go from stable to dead from the global pandemic. As one doctor says, he has filled out more death certificates in one day than he had previously done in the last eight months.

Toboni scored rare access to the hospital, in the middle of the New York/New Jersey epicentre, to highlight the professional challenges and personal sacrifice that comes with fighting this historic pandemic.

Vice showrunner and exec producer Beverly Chase told Deadline that the outbreak has been challenging for the show, which had filmed around half of its first season before Coronavirus took hold. “The show is challenging to make in the first place, we now just have a new challenge. We’re really lucky that the series has been in production since November. We did have to call some people back from the stories that they were shooting… now we’re pivoting to figure out ways to cover Covid and the world that we’re heading into,” she said.

Elsewhere on Sunday’s episode, Vice’s Ben Anderson investigates the troubled relationship between the Marshallese and the U.S. after the U.S. built a dome on the Marshall Islands, halfway between Hawaii and Australia, to contain lethal plutonium and other radioactive debris.

The episode airs on Sunday May 10 at 8pm.