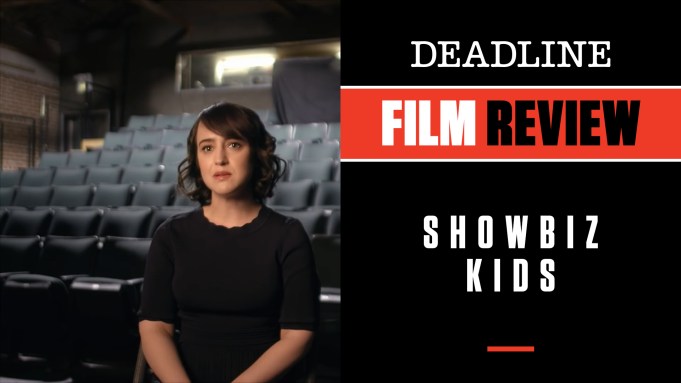 Alex Winter, whose latest starring role is the upcoming Bill & Ted Face the Music, the third of the Bill & Ted films in which he co-stars with Keanu Reeves, actually started in the business as a child actor in such Broadway productions as The King and I and Peter Pan. They are experiences that makes him a credible choice to write and direct a documentary exploring the ups and downs of being a kid involved in a high-profile career at such a young age. So the new HBO Documentary Films production Showbiz Kids is a perfect fit, and Winter has crafted a highly entertaining, informative and wise look at the pitfalls and advantages for those who hit the boards and soundstages so early in life. Stories of child stars are not new, but Winter gives it a fresh and pungent spin here.

Where this film really succeeds in bringing unique perspective to the subject is with the excellent cross-section of interviews Winter was able to land, including two from child stars at different ends of the age spectrum who both have passed away since being interviewed for the film. It starts out with one of them, a sharp and knowing conversation with Diana Serra Cary, aka Baby Peggy, her stage name as a silent film star from the age of 2 and then all washed up by 7, as she puts it. Shirley Temple she wasn’t. Kids have been in demand as long as there have been movies, and as she points out from the vantage point of being 101 when this was filmed (she died earlier this year), it is still a problem when suddenly you aren’t as cute as you once were and the industry tosses you aside. The film points out that some kid stars of her era were not protected and often cheated of all the money they made. Laws were enacted later to prevent that, but it was a tragic time for some of these kids who peaked before they could even walk.

It was great that Winter was able to get her on film before she died, as it was in the case of another interviewee, Disney Channel star Cameron Boyce, who tragically died of an epileptic attack at age 20 shortly after completing his participation here. He smartly realizes exactly what the advantages and disadvantages are of hitting success at this point in life — a guy who clearly was able to see it for what it was and not let fame destroy him. What a loss.

Among those interviewed are former child stars like Evan Rachel Wood, Mara Wilson, Milla Jovovich and Henry Thomas, the latter of whom is particularly insightful describing what happens when a kid from a small Texas town suddenly is dealing with all the adoration that comes from starring in E.T. the Extra Terrestrial, one of the biggest movies ever. Among the choice nuggets of footage Winter digs up is the immortal audition tape of Thomas instantly getting the role from Steven Spielberg after his emotional emoting on camera.

Wood is particularly good in talking about the downside of this career path and clearly she has been there and seen it all, somehow emerging with her head on her shoulders.  Stand By Me and Star Trek: The Next Generation actor Wil Wheaton also is a great interview subject here, as he admits it was his mother that wanted this career for him more than he did. Jovovich is quite amusing in that regard as well, talking about how she was thrown into the business by a Russian immigrant mother who was a big star in her homeland but never got noticed after moving to America. Her daughter became the closest thing she had to catching that wave of stardom again. Jada Pinkett Smith, who has had two kids follow her into showbiz, also offers sage observations and advice.

Two young unknown actors are smartly weaved in and out, showing the day-to-day rigors of what it takes to compete for roles in a dog-eat-dog business. Demi Singleton is a talented young actress who is here interviewed with her mother as they traverse Broadway. Marc Slater is a kid from Florida who comes to Los Angeles with his parents for TV pilot season. Do these kids have what it takes to make it in the business without becoming bruised and bitter? A telling interview Winter gets with once-troubled Diff’rent Strokes co-star Todd Bridges might give them pause.

Archival footage and vintage interviews with other famous child stars from Brooke Shields to Gary Coleman to Jodie Foster are effectively used as well as one with Temple, perhaps the biggest child star in movie history, who says she thought it was a natural thing to do — that every kid worked. This is a fascinating and memorable docu. HBO and HBO Max begin running it Tuesday. Producers are Ringer Films’ Bill Simmons, Glen Zipper and Winter.

Check out my video review above with scenes from the movie. Do you plan to see Showbiz Kids? Let us know what you think.