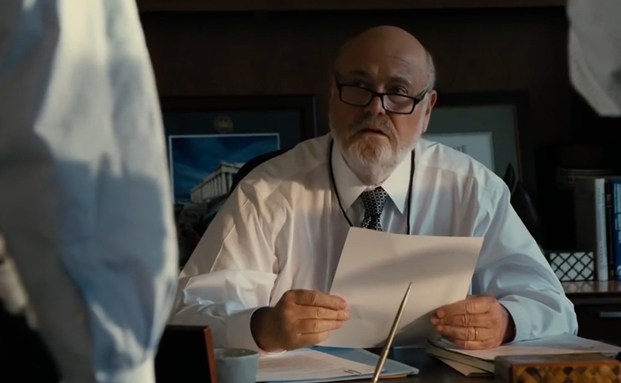 There could not be a better time than now for Rob Reiner’s powerful story of journalism on the front line in Shock and Awe. With a free press a constant right-wing target these days, and a president who labeled journalists the “enemy of the people” again just last weekend, this is a true and inspiring story of four Knight Ridder newspaper reporters who were the only entity in the media who correctly got it right about the falsehoods used by the Bush administration in 2003 to lead the U.S. into the war in Iraq under the premise that Saddam Hussein had weapons of mass destruction and was acquiring nuclear bombs.

Director Reiner, employing his usual craftsmanship, along with screenwriter Joey Hartstone (who also wrote Reiner’s recent LBJ), doesn’t break any cinematic ground with this film. We have seen many fine films set in this milieu such as All the President’s Men and recently The Post, but as I say in my video review above, the filmmakers have more on their mind here than just a good crackling newspaper story. The famously politically active Reiner is sending a warning with Shock and Awe that the credibility of the fourth estate is very much at stake, particularly now in the era of “fake news” and cable networks like Fox News. He weaves actual footage from the era in and out of this story of the four journalists who did indeed risk their credibility to get it right, even while being attacked and discounted by members of their own tribe. That included Judith Miller at The New York Times, which, like every other outlet at the time, got it wrong and later apologized for it.

Jonathan Landay (Woody Harrelson), Warren Strobel (James Marsden), veteran Joe Galloway (Tommy Lee Jones) and their editor John Walcott (Reiner) put their careers on the line once they got wind of the real facts the administration did not want out there. The word “truth” is what you hear over and over in this film, which also focuses on one of the victims of the Iraq War, Adam (Luke Tennie), who recounts his own experiences and the loss of his legs in a war that essentially was built on a lie, as the film points out. That puts a nice human touch on the story, but the real focus is on these journalists and their dogged determination to get answers.

There also is an attempt to tell their own personal stories, with the divorced Strobel and a budding romance with a neighbor (Jessica Biel), as well as Landay’s relationship with his foreign-born wife who fears the family might be targeted because of his reporting. The overall cast is excellent, and Reiner fits nicely into the role of a newsroom leader who is old school all the way. Reiner actually was forced to cast himself in the role when Alec Baldwin dropped out just two days before filming started. He did well by it, and by this movie, which almost feels like a docudrama in some ways, considering the extensive use of actual footage from other reporters at the time and key people involved including President George W. Bush and particularly Vice President Dick Cheney. It’s chilling in light of current events, a changing America not even happening when Reiner first conceived of telling this story 15 years ago.

Producers are Reiner, Matthew George and Michele Reiner. Vertical Entertainment releases the film theatrically Friday, following its exclusive monthlong run on DirecTV. For anyone who cares about the importance of a free press, this is a must.

Do you plan to see Shock and Awe? Let us know what you think.