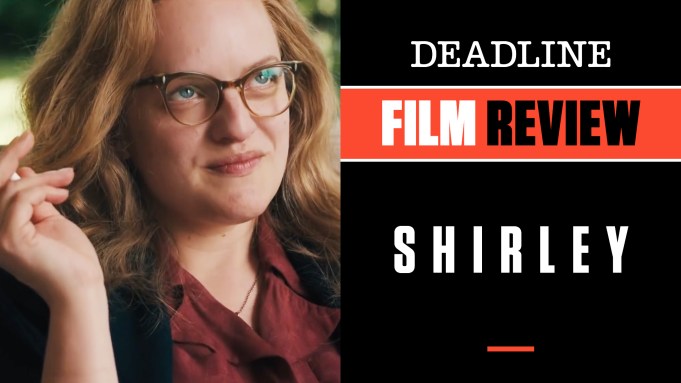 It is not surprising to see Neon behind the indie film Shirley. The movie won acclaim at this year’s Sundance Film Festival and has a sterling cast led by Elisabeth Moss, Michael Stuhlbarg and Logan Lerman, plus subject matter that should thrill the art house crowd. Coming on the heels of the hot distributor’s Oscar-season triumph with Parasite, Shirley looked like a surefire shot at more awards attention. But the real reason I was stoked to see it was that it was tipped to be an Edward Albee-esque type drama on the level of a wickedly smart regeneration of Who’s Afraid of Virginia Woolf in which a battling married couple in a college environment serve up their “fun and games” on an unsuspecting young couple who come into their lives. Count me in. But after eagerly getting a review link of the VOD release, count me out.

Shirley is a real disappointment from director Josephine Decker (Madeleine’s Madeleine) and screenwriter Sarah Gubbins, who take an approach to what might appear to be a true story of the celebrated author Shirley Jackson in the final years of her life. Your father’s biopic this is not, because not only does it take wild swings and dramatic liberties, it completely runs over the truth with a Mack truck. Jackson, who rose to fame in 1948 with her New Yorker story “The Lottery” and went on to write classics like 1959’s “The Haunting of Hill House” and 1951’s “Hangsaman,” is merely a prop for the arty telling of a fable about her writer-y obsessions and blockage as she sets out to pen her future masterwork “Hangsaman” while dealing with the indiscretions of her husband Stanley Hyman, a literary critic/professor at an all-women’s college in Bennington, VT. There are also intriguing encounters with Rose, the pregnant young wife who comes into her life when her husband Fred gets a job as Stanley’s assistant/protégé on campus.

Jackson fans beware: this is pure fiction, perhaps an attempt by the filmmakers to wrap Jackson into the guise of female characters she has written in her remarkable works. The movies have often had a hard time getting into the heads of the great literary icons and making their stories cinematic (it is hard to watch typing), but what we get here is warmed-over Albee, a drip-drip-drip tale of pseudo-intellectual Eastern college academia that kept giving me excuses to look at my watch. The beating heart of Jackson should be front and center if one is going to take this kind of approach, but it is sadly missing in terms of what was being aimed for.

Here’s the good part: Moss, an actress of such solid instinct and extraordinary gifts (witness her superior The Invisible Man on VOD for proof of that), can light up just about anything, and she really gives it the old college try here by wrapping herself in the increasingly dour, sour moods of Jackson with the best lines by far as she verbally assaults her young visitors with acid wit. Basically she almost never leaves her dark abode (a memorable party scene aside), and when she does she is pretty insufferable. Moss makes her watchable; no mean feat. In real life, Jackson and Hyman actually had four children, and she was writing “Hangsaman” in the early ’50s, not the mid-’60s when this film is set. The children have been completely erased — no mention whatsoever, much less presence. Add that to the other head-scratching creative choices here and you have to wonder why these filmmakers wanted to put Jackson in an alternate universe in the first place, and not just totally make the whole thing up.

In addition to Moss, the always reliable Stuhlbarg as Stanley is nicely cast as well, though thoroughly unappealing. I would have much rather seen Moss and Stuhlbarg go at each other in a film remake of Who’s Afraid of Virginia Woolf, though topping Taylor and Burton would have been tough. These two pros possibly could have pulled it off, rather than being stuck in this muck. Lerman as Fred and the talented Odessa Young as Rose do as they are asked, with the latter also filling in for dreamy sequences as the missing Bennington coed at the center of the plot of Jackson’s novel-in-progress.

Supposedly Decker and Gubbins chose Susan Scarf Merrell’s Shirley as a template for their surreal non-biopic rather than the more, shall we say, truthful books that have been written about this great writer. There is probably a good movie in Jackson’s life somewhere. Oh well, next time. Producers are Christine Vachon, Jeffrey Soros, Sue Naegle, Simon Horsman, David Hinojosa,  Gubbins and Moss. Martin Scorsese is an executive producer. The names behind Shirley are clearly impressive. I wish I liked this one better. It sounded great on paper.

The movie hits digital and VOD on Friday, but would have played much better on the art house circuit than your television set.

Check out my video review above with scenes from the film. Do you plan to see Shirley? Let us know what you think.