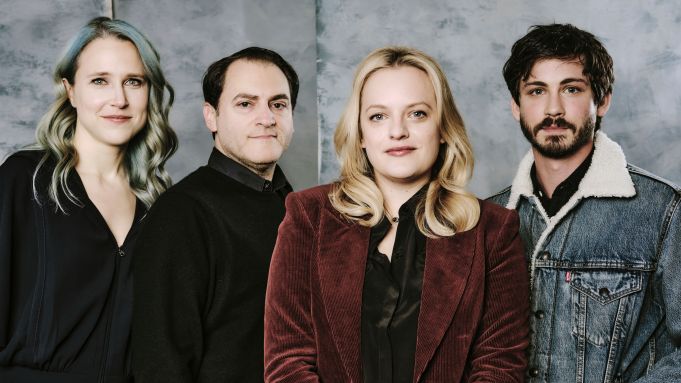 Shirley, which premiered at the Sundance Film Festival on Saturday, is a fictionalized story inspired by real-life horror author Shirley Jackson and her husband Stanley Hyman.

“This is based on a work of fiction,” director Josephine Decker noted about the film, which is an adaptation of Susan Scarf Merrell’s 2014 novel of the same name. “We were not making a film that we ever thought, ‘Oh, we’re making a film about the real Shirley Jackson’. In fact, the script really meshed up a bunch of timelines in the real Shirley Jackson’s life, so it absolutely was a fiction. None of the things that are in the film could have happened in real life because of just the way that the time worked out… I think we were very clear that this is definitely a fictional person that we’re creating. And so that gave us a lot more freedom.”

Decker was joined by stars Elisabeth Moss, Logan Lerman, and Michael Stuhlbarg at Deadline’s Sundance studio. Moss spoke about the “incredible amount of material on Shirley and Stanley” which she and Stuhlbarg used to created fictional versions of their characters.

“We really wanted to be as honorable to Shirley and Stanley as possible and portray them as they were but at the same time, at a certain point, we had to acknowledge that we need to also play our Shirley and Stanley and capture the essence of their relationship,” said Moss.

She continued, “There was a process of learning all of the physical mannerisms and their history and all these letters and stories about them and it was so fascinating. And then looked at each other and we’re like,’ alright, let’s let that go now and let’s do our thing. And so it was an important part of the challenge.”

Written by Sarah Gubbins, Shirley follows a young couple, Fred (Lerman) and Rose (Odessa Young), who moves to a small Vermont college town in pursuit of a job for Fred as an assistant professor of literature. They are offered free room and board from professor Stanley Hyman, as long as Rose agrees to spend time cleaning up the home and looking after his wife, acclaimed horror author Shirley Jackson. At first Fred and Rose detest the rocky household but they eventually establish deep bonds with their counterparts, which will test the limits of their young love.

See the full interview above.