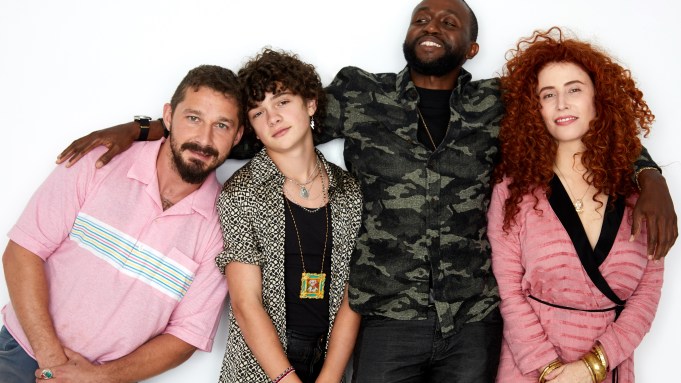 Shia LaBeouf wrote Honey Boy — his confessional tale of an unmoored childhood and consequent adult struggles — at a time when no one would work with him, when he says he was an industry persona non grata. And yet, there was one person who always stood by him: director Alma Har’el.

“She was the last person talking to me at this point in my life,” he said at Deadline’s TIFF studio. “You know, nobody was really trying to f–k with me. I was like a seed; they were throwing dirt on my back.”

LaBeouf’s deep dive into a story based on his life as a child star chaperoned by an unpredictable, alcoholic father, followed by a young adulthood in court-ordered rehab, became Har’el’s surrealistic fever dream film, with reality in snapshots—the exact way she sees the workings of human memory.

“I don’t really separate that much between the objective and the subjective, or the reality and the dreamscape,” she said. “All of those things just seem to me that finding the right balance between them is what’s the most honest way for me to tell a story, or help somebody tell a story. It’s interesting how we have reality, but each one of us goes to bed every night and dreams dreams that only he can see. We all have an inner life, and a subjective sense of reality, that I always try to capture a little bit of.”

LaBeouf plays the role of James, based on his own father, but that wasn’t always his intention. “I went to this court-ordered therapy,” he said, “and they made me do a whole bunch of exposure therapy. So, you write down a bunch, dealing with PTSD and a lot of your trauma, and [what I sent her] came out in script form, because that’s just how I’ve been doing this for quite a while. It’s just how I write, and I sent her the script—not even a full script, just like a conversation between two characters, a young me and my father. And at the time, I wasn’t trying to play my dad; I was just writing this thing down and then sent it to her, and she’s like, ‘One, this is a movie.’”

Playing Otis, the young version of LaBeouf, Noah Jupe was able to improvise and collaborate on the role with LaBeouf and Har’el.

“It’s like Otis was his own character,” he said. “[Shia] wasn’t married to the script necessarily. He wasn’t there going, ‘No, I didn’t do this. No, I didn’t do that. That never happened.’ It was more like he wrote down the circumstances that had happened to him, and then let us just play with it… we would be in a room, and Alma would have a handheld, and there would be another camera, and we’d just play. We’d just improvise, and especially as me and Shia got really close.”

As Percy, the adult Otis’ friend in rehab, Byron Bowers found his own personal narrative.

“It resonated on so many levels, because I’m the child of an addict,” he said. I’m a stand-up comic who talks about mental health and stuff on stage, so I always try to bring in truth and balance to my art… You get to explore how somebody can have PTSD, or have certain issues, and I think that’s important for the world, to even heal within itself.”