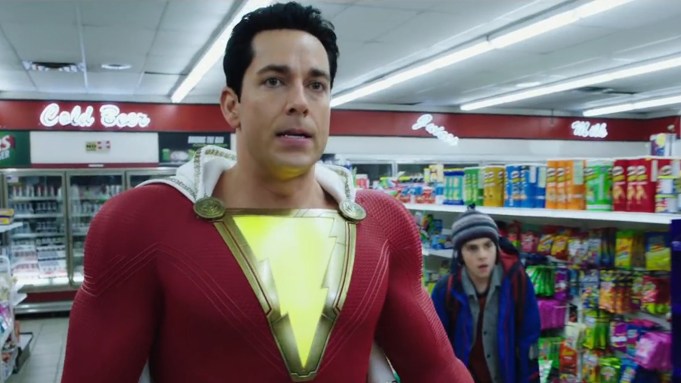 DC Comics and Warner Bros take a bit of inspiration from Big, the classic 1988 Tom Hanks film, and then throws it all into a superhero format. As simple as saying “Shazam!” you have, Shazam! It is not one of the best-known of DC properties — certainly no Superman or Batman or Aquaman — but it has its charms, even in a bloated 132-minute movie that lets villainry and monsters get too much in the way of a tale that looks like the kind of thing Steven Spielberg churned out in the ’80s.

Billy Baston (Asher Angel) has been tossed from foster home to foster home since being abandoned by his mother. Finally he lands in one that gives him five instant siblings including a new BFF named Freddy (Jack Dylan Grazer), who is disabled but a real firecracker. One day while riding a bus, Billy finds himself transported into a netherworld for a meeting with a wizard (Djimon Hounsou, in a role he can do in his sleep by now). He is now a chosen one, a kid who can turn instantly into a caped, crusading adult just by uttering the word “Shazam!”

That is when Billy turns into a confused superhero and the picture gets a huge lift with the emergence of Zachary Levi, who livens things up considerably. As in all these things, there has to be a villain for him to confront, and that comes in the guise of Dr. Thaddeus Sivana (Mark Strong), who seems to be able to conjure up some pretty scary monsters on a moment’s notice. This part of the movie is pretty much standard comic book stuff, but fortunately director David F. Sandberg is able to switch back and forth between the two iterations of Billy at 14 and then straight to Levi. The fun comes from Billy dealing with these newfound powers and using them with a lot of input from Freddy.

Make no mistake, Shazam! is nowhere near the ballpark of the film that inspired the Henry Gayden script (there is even a brief homage). It stops too often for the silly frenetic action, but when it is on its game, it is welcome indeed — certainly bringing a lighter tone to the DC universe, much like other recent stand-alones Aquaman and Wonder Woman. It is nice that the DC franchise has found the comic in comic books again, particularly this time around.

Levi is a big reason this works, but for me the film is stolen lock, stock and barrel every time Grazer shows up as Freddy. He is the ideal sidekick and makes this shtick really work in his own way. It also is nice to see a disabled character treated like any other and not a pity case, as has been done so often in Hollywood movies. The other kids in the supporting cast who join Billy’s force for good toward the end also add a nice touch. Had they lopped off 20 minutes or so, Shazam! would really be something to write home about. As it is, I’m betting it still will hit the sweet spot until the Avengers come along later in the month. Producer is Peter Safran. Warner Bros. releases it Friday with previews Thursday night. Check out my video review above with scenes from the film.

Do you plan to see Shazam!? Let us know what you think.