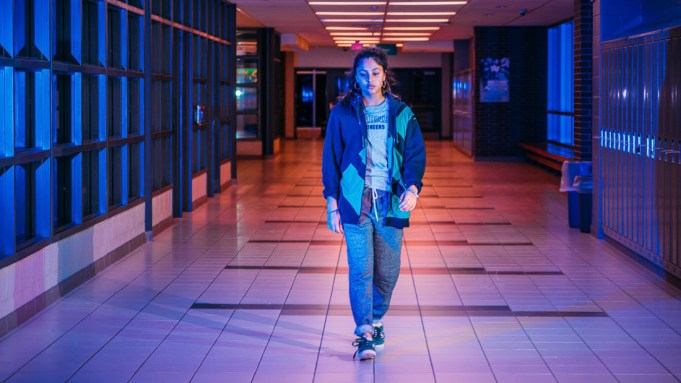 In her feature directorial debut, Share Pippa Bianco dives into the world of the good and bad of social media — mostly the bad. She and star Rhianne Barreto stopped by the Deadline Studio at Sundance to paint a story of struggle when it comes to social media.

The film follows high-school sophomore Mandy (Barreto), who discovers that a series of cell-phone videos of her half-naked and semiconscious have gone viral. As her normal life goes into a downward spiral, she struggles to piece together what happened. She is also uneasy about her parents as they are looking to take action on her behalf. From this, she  navigates through a landscape of the good intentions of others while trying to heal from an incident that she can’t totally remember.

Bianco initially pictured Share as a full-length feature, but she said that “the best way to explore the film in its fullest form” was through a short…she also laughingly admits she didn’t have the funds.

The short was made in 2015 and the social media landscape since then has changed and in turn, she says the meaning of the film has changed with her.

“I feel social media, like anything else, a very complicated and multifaceted part of existence,” she tells Deadline. “The good is good and the bad is bad.”

She says of today’s Insta-culture of selfies, “The power self-determination and self-presentation and crafting your own narrative is cool…that can be very healthy for people to look at themselves in a screen and empower themselves to tell their own story.”

She adds, “There’s also the negative which voyeuristic, being outside of yourself and being detached and being an object of consumption… the film engages in the darker side of the spectrum.”