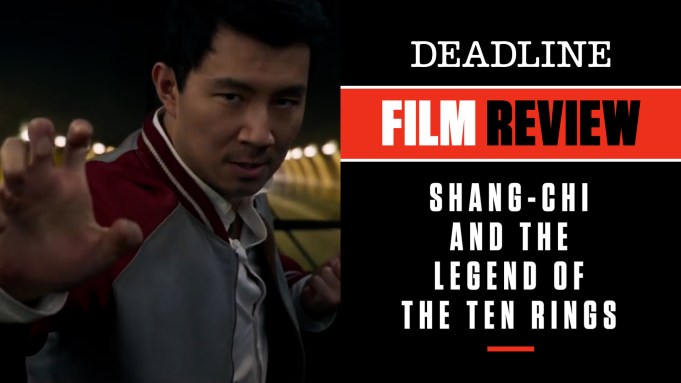 Captain America, Iron Man, Black Panther and all those other Avengers might as well move over and make room for Shang-Chi, as the MCU has a new franchise and a welcome new direction post-Endgame. This thoroughly engaging reimagination of the Marvel comic book that debuted in the ’70s has been retrofitted for its movie debut, and the results are encouraging to say the least.

With a largely unknown Simu Liu taking on the title character in grand style, Shang-Chi and the Legend of the Ten Rings is far more than just a martial arts action picture, but rather one with a terrific ensemble cast (taken on its own terms as culturally significant in its way as Black Panther was in the MCU), a cool origin story and a smart attitude that blends clever action sequences, genuine humor and best of all a new group of MCU characters that prove it didn’t all have to go downhill after the Avengers.

At its heart a father-son story, as well as learning to take on responsibility for family tradition while also forging your own path, fans ought to eat up this character who we meet as Shaun (Simu Liu), a parking valet in San Francisco working the shift with his good friend Katy (Awkwafina). When some unwelcome masked assassins send the pair barreling through the streets of SF on a city bus, Shaun’s previously unknown fighting skills proceed to stun Katy and banish the bad guys, who are after a pendant given to Shaun by his late mother — a bauble that is of great importance to the secret and vicious Ten Rings Organization.

Surviving this rousing chase — which turns out to be a cinematic bus ride worthy of Speed and then some — Katy is forced to ask the question: “Just who are you?” as Shaun, revealing his actual name is Shang-Chi, must head to Macau on a mission to save his family — basically from itself, as it turns out, because guess who is head of this evil organization? Well, dear old Dad aka Xu Wenwu (Tony Leung). And when Shaun (and Katy, who insists on coming along with him) get to Macau, the fireworks start with a match between Shang-Chi and Xialing (Meng’Er Zhang), who, after a memorable entrance displaying exceptional martial arts skills against big brother, is revealed to be none other than his sister, who he has come to warn is also in danger. As more spectacular action set pieces proceed (one set in a building under construction is really nifty), the story shifts to a more complex showdown between father and son and unleashing forces that just could also free his presumed-dead mother. Or not.

Along the way, help and guidance is provided by the siblings’ auntie Yin Nan (Michelle Yeoh), who becomes something of a stand-in for their mother as well as an invaluable mentor. Also turning up is Trevor Slattery. Remember him from Iron Man, where the Ten Rings was first broached? He was the actor sent in to impersonate The Mandarin, archenemy of Tony Stark. He’s back as the very quirky but funny thespian who joins Shang-Chi and gang on their quest. Ben Kingsley returns in the role and offers all the comic relief you could ask for. Another familiar character also turns up along the way as Wong (Benedict Wong of Doctor Strange and Avengers fame) is around later in the flick too. And as with any Marvel movie, it would be wise to stick around until the very end, lest you miss clues to what is to come in future Shang-Chi adventures. And yes, a la James Bond, the producers promise he will be returning.

Director Destin Daniel Cretton (Short Term 12, The Glass House, Just Mercy) guides all this with flair and style and co-wrote the script with Dave Callaham and Andrew Lanham. It doesn’t turn its eye from the essential center of this story about a young man, content with living a life like his peers who has to face the fact that his father is the diabolical but conflicted leader of one of the world’s most dangerous criminal enterprises. How he deals with the mission of saving the world from that, but also finding purpose within himself, is the journey we take along with him. Thankfully the filmmakers were smart to jettison the more stereotypical aspects of the original comic including use of Fu Manchu as Shang-Chi’s father. They have made it better and smarter than that, so fans of the original ’70s iteration, be prepared. This is not your father’s Shang-Chi.

Liu might not be well known, but after this film, he definitely will be. He brings a nice balance of an average-guy thrust into superheroic responsibility but remains relatable all the way. He is perfectly matched with Awkwafina, who lends her comic timing with a real spirit to help in the fight, despite not having the lineage to do it. Having actors of the caliber of Leung and Yeoh just add to the gravitas Marvel builds with this one. Both are excellent, and Leung adds real dimension to a role that thankfully is not cut from the usual villain tropes. Newcomer Zhang also is excellent as Xialing, and there is a fine cast of Asian actors rounding out the superb ensemble. Above all, this thing is a lot of fun. Special shout-out to the great score by Cretton’s go-to composer, Joel P. West.

Producers are Kevin Feige and Jonathan Schwartz. Disney will release it exclusively in theaters — which is where it belongs — on September 3. Check out my video review with scenes from the film at the link above.

Do you plan to see Shang-Chi and the Legend of the Ten Rings? Let us know what you think.