'This Is Us': How NBC Drama Wrapped The Pearsons' Story After Six Seasons; Dan Fogelman Breaks Down Series Finale; Stars React To End
Read the full story
April 9, 2021 6:37pm 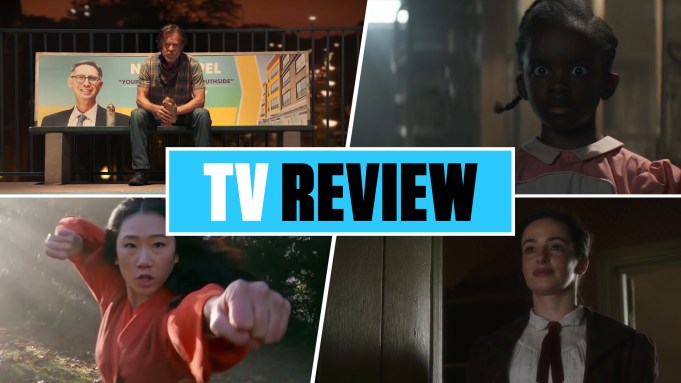 The Oscars are just two weeks away, and the sun is out in California, but there is still some kickass television to keep you inside.

The question is who will be the show you have to watch this week. The answer is in the video above.

After 11 seasons on Showtime, Shameless comes to an end this weekend.

If you caught the penultimate episode last week, you know that there’s a Chicago cliffhanger for William H Macy’s Frank Gallagher going into the April 11 series finale. Penned by showrunner John Wells, the ‘Father Frank, Full Of Grace’ episode sees the conclusion of the poverty line looming Frank and his offspring’s’ often booze and drug fueled escapades. With the Covid-19 pandemic, gentrification and Frank’s increasingly bewildered relationship with reality, there’s a lot of forms that ender might take, if you know what I mean?

The Olivia Liang-led Kung Fu helped deliver the highest total Wednesday viewership the CW has had in seven years with its April 7 debut. A reimagining of the David Carradine starring martial arts series of the early 1970s, this Christina M Kim developed Kung Fu is set in a modern-day San Francisco with a backdrop of crime and family drama.

Returning to the States after years at an isolated Shaolin monastery and a search for independence, the Liang portrayed Nicky Shen is searching for her mentor’s assassin and to mend some domestic fences in the Greg Berlanti EP’d show. Discovering her parents, Jin (Tzi Ma) and Mei-Li (Kheng Hua Tan), are under the thumb of a ruthless Triad, Nicky also has to contend with her soon-to-be married sister Althea (Shannon Dang) and Althea’s fiancé Dennis (Tony Chung), pre-med brother Ryan (Jon Prasida), Assistant D.A. and ex-boyfriend Evan (Gavin Stenhouse), and new love interest Henry (Eddie Liu). BTW- If you missed the pilot for Kung Fu, you can watch it online or see the repeat on TNT on Sunday.

The behind the scenes drama involving series creator and now departed Joss Whedon has certainly dimmed the premiere of The Nevers on April 11 on HBO.

Yet the initial run of six episodes of the supernatural Victorian Era series’ first season finds a very different London from that in the history books. Full of the debauchery and production value you’d expect from the home of Game of Thrones, The Nevers finds the Laura Donnelly portrayed Amalia True assisted by Ann Skelly’s inventor Penance Adair overseeing an orphanage of the so-called Touched and their strange powers.

The remaining six episodes of Part Two of The Nevers is expected to air later this year on the premium cabler.

Launching today on Amazon Prime Video, Them is a horror story for our times and from our past, in more ways than one.

The already renewed Little Marvin created and Lena Waithe EP’d anthology series starts off its 10-episode first season with Henry (Ashley Thomas) and Lucky Emory (Deborah Ayorinde) moving themselves and their daughters from North Carolina to the all-white Los Angeles neighborhood of Compton in 1953. To put it mildly, set two years before Rosa Parks bravely refused to give up that seat on that Birmingham bus and in the midst of the Great Migration the Eisenhower era suburbs and residents Betty Wendell (Alison Pill) like don’t prove too welcoming to the African-American family. Add to the ongoing horrors of American racism, Them has trauma from the Emorys’ past and an injection of the supernatural for a terrifying impact.

Watch the video review above to see which show you have to watch!