Continue to Deadline SKIP AD
You will be redirected back to your article in seconds
Skip to main content
June 13, 2019 5:10pm
6Comments 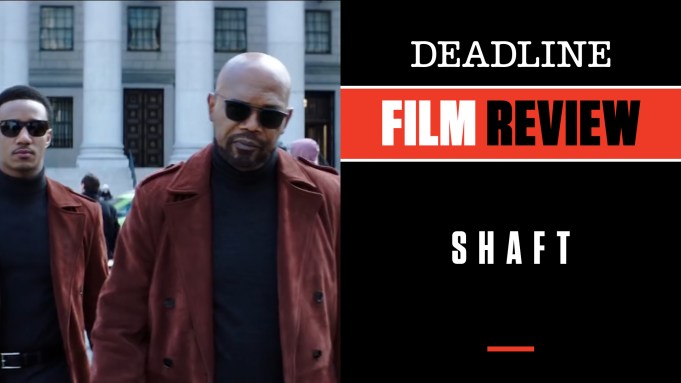 With a couple of sitcom writers handling the scripting chores, the 2019 Shaft naturally leans on the lighter side. It goes as much for laughs it seems as it does for the kind of violent action we associate with the iconic character who first breathed cinematic life nearly a half-century ago with Richard Roundtree taking on the streetwise man immortalized in Oscar-winning lyrics that described him as “the black private dick that’s a sex machine to all the chicks.”

That is not exactly the description of a movie character made to thrive in the #MeToo moment, but writers Kenya Barris (Black-ish, Girls Trip) and Alex Barrow (The Goldbergs, Family Guy) have come up with the perfect buddy-movie formula to make it work. And they haven’t even bothered to change the name from the 1971 original — which spawned immediate sequels Shaft’s Big Score, Shaft In Africa and a short-lived 1973 TV series — to a Samuel L. Jackson reboot in 2000 from the late John Singleton and now to the 2019 version. All are just called Shaft. Why mess with success?

This one, however, creates the clever premise of revealing a previously unknown and very PC son of the tough-talking, gun-toting, very un-PC vigilante (again played with delicious relish by Jackson). In a flashback opening scene, we see John Shaft involved in his usual violent confrontations, then returning to his car with significant other Maya (Regina Hall), who gives him holy hell for putting their newborn in the back seat in such a situation. Cut to 30 years later and that baby now is known as J.J. or John Jr. (a spirited Jessie T. Usher) and works as a data analyst for the FBI. He’s a straight-up millennial living a proper life, which is the total opposite of the father he hasn’t seen in 25 years — who sent his kid condoms as a Christmas gift before he even hit his teens and who hasn’t changed his tough, streetwise, kick-’em-where-it-hurts style in all that time. He’s a man who clearly isn’t up on, or even cares, about where society is at the moment.

They couldn’t be more of an odd couple as J.J. finds his path crossing with his father when he needs some down-and-dirty help in solving the mysterious murder of a friend, a war vet and drug addict who supposedly overdosed. This all leads to a mosque and a suspected Islamic terrorist group, as well as an organization called Brothers Helping Brothers, a group of vets who might have darker intentions that that name indicates. The plot doesn’t matter as much as the emerging relationship between father and son, much to consternation of Maya, who also hasn’t bothered to think about her ex in years. Father helps the son grow a pair, while son helps the father tone it down a notch. It borders on sitcom at different points as J.J. finds himself in way over his head.

Ultimately it becomes a Shaft family affair when the eldest John Shaft (Roundtree, in a welcome return) shows ’em he hasn’t lost his touch. Unlike the 2000 reboot, in which Jackson played a Shaft who was a nephew to the original, he has now been changed to his father and J.J.’s grandfather. They make quite the trio in the film’s last third, and though much of it is over-the-top high jinks, it all is quite entertaining. A big reason for that is Jackson, who slips into this guise of Shaft with the comfort of a pair of old shoes. It is hard to believe he’s 70, just six years younger than Roundtree, actually. Teamed with a new generation of Shafts, it is a great concept that conceivably could make this version not the last time we hear the name. I wouldn’t mind that at all.

Of course this is helped enormously by that famous Oscar-winning Isaac Hayes theme music, nicely adapted and incorporated into Christopher Lennertz’s ace score. Tim Story (Ride Along, Think Like a Man) directs expertly, no stranger to bringing a sharp comedic style when needed. The producer is John Davis. Warner Bros. releases the New Line Cinema production in previews tonight and wide Friday ahead of Father’s Day. Check out my video review with clips from the movie at the link above this post.

Do you plan to see Shaft? Let us know what you think.