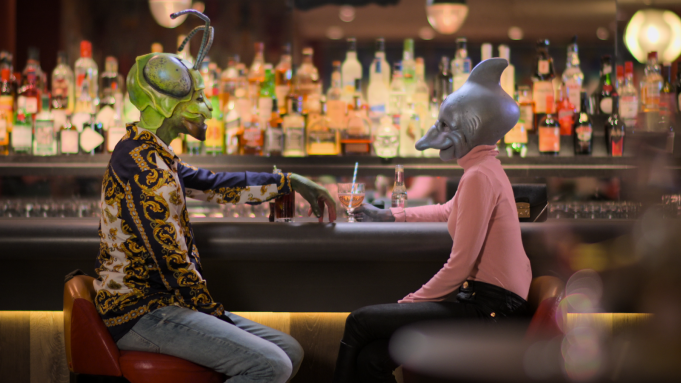 The ultrafast-talking panda has a plan: “I wanna get married, I wanna have babies before I’m like 26 — do you have health insurance?” she says/asks. From across the table, dude in the bull mask and blond curls just kinda stares back, words apparently failing him.

Welcome to the wacky — wacko? — trailer for Sexy Beasts, Netflix’s upcoming dating reality series with a Masked Singer twist. And what a twist: Real-life singles sport elaborate makeup and prosthetics to put true blind-date chemistry to the test. Only after decisions are made about potential suitors do the masks come off.

“Could you fall in love with someone based on personality alone?” the voice-over asks — after an beaver-masked guy greets his Smurf-demon date in a skintight dress with, “Damn, how you doin’?”

Such is the dichotomous premise behind the streamer’s new adaptation of the UK’s really-high-concept format. The press notes say this: “Sexy Beasts is the dating show that takes looks completely out of the equation using fantastical, cutting-edge prosthetics to transform the daters — giving them a chance to find love purely based on personality!”

Uh, yeah, but only the faces are covered as competitors go bowling, skeet shooting, rollercoastering, hatchet-throwing and such.

Apparently these singles are hope to say goodbye to superficial dating — even though the panda later is seen asking, “So what if I pick you and I’m not what you expected underneath?” The guy in a Pendleton with a Mars Attacks!-type mask sorta shakes his head and looks away.

Announced in January, the 12-episode series All3Media-owned Lion TV launches July 21 on Netflix. Watch the trailer above with your wingwoman or thingman or — your pet, maybe?