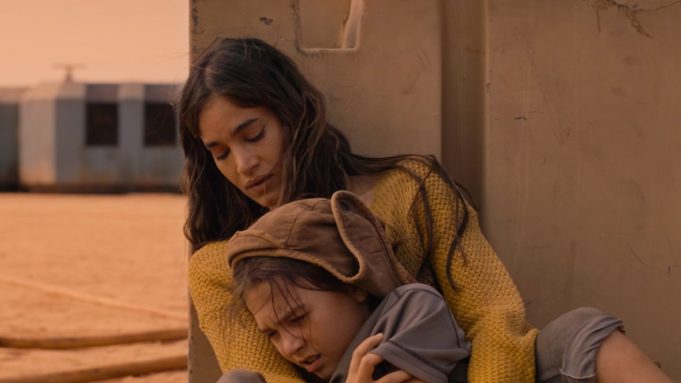 EXCLUSIVE: Deadline has your first look at Settlers, a sci-fi Western from Wyatt Rockeller, which IFC Midnight will release in theaters and on demand, on July 23.

The writer/director’s first feature is set on a remote homestead on the Martian frontier, following a refugee family from Earth that clings to hope for a better life. When strangers appear in the surrounding hills and attempt to run them off, nine-year-old Remmy (Brooklynn Prince) is faced with the desperate reality her mother (Sofia Boutella) and father (Jonny Lee Miller) have tried so hard to keep from her.

“Shooting in such a remote location was not without its challenges, but it was well worth it for the unique landscape and sense of isolation it provided,” Rockefeller tells Deadline. “In the course of a few days, we had to contend with extreme heat, sandstorms and a lightning storm that nearly collapsed the set — in a place where it almost never rains. But morale actually improved following the toughest stretch as the cast and crew pulled together to get through it.”

The film was produced by Julie Fabrizio, Joshua Horsfield and Johan Kruger. Ben Pugh served as executive producer, with Kenny Moleme and Jason Mandl also on board as co-producers.

Rockefeller got the film made with additional support from the NYU Production Lab. The London-based filmmaker, who has also written, directed and produced various short films, commercials and documentaries, previously attended the university, where he received a dual MBA-MFA in film.

Settlers premieres at the Tribeca Film Festival on Friday. It will also be available that day to stream, as part of Tribeca at Home, starting at 8:00 p.m. EST.

Check out the first trailer for the film above.