Continue to Deadline SKIP AD
You will be redirected back to your article in seconds
Skip to main content
August 3, 2020 8:50pm
8Comments 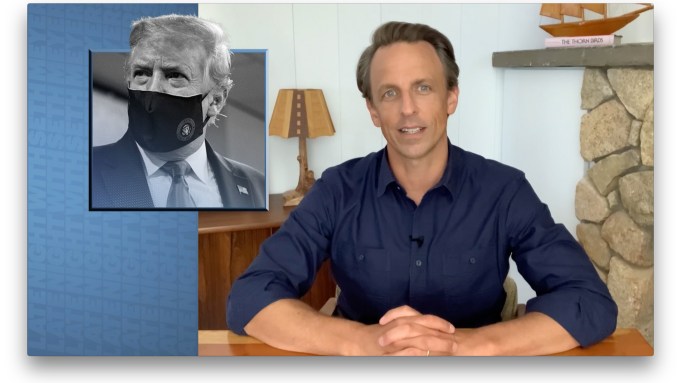 During the newest episode of Late Night, Seth Meyers criticized President Donald Trump for his plans to ban TikTok, even as the coronavirus continues to the spread in the United States and as millions of U.S. residents lose unemployment benefits.

“I’m betting TikTok is one of the answers he wrote on his cognitive test,” the late night host joked during Monday’s episode.

While the President’s plans to rid the United States of the short form video platform was a talking point for the latest episode, it was far from being the only one. Meyers kicked off his A Closer Look segment examining a COVID-19 testing plan the president and son-in-law Jared Kushner had reportedly scrapped.

Meyers cited a Vanity Fair article that reported the White House plan to provide better coverage against the infectious disease had just disappeared.

“We almost had one until Jared Kushner slithered out of his Westworld milk bath and fucked it up,” he complained. “Guess it’s not surprising to learn that Jared Kushner’s a sociopath. Look at him, he looks like Hannibal Lector in a CW Silence of the Lambs.”

Scrapping the plan to provide better protections against the spreading coronavirus disease was “evil and stupid,” the Late Night host said.

Meyers continued his Trump tirade questioning the president’s confidence in Stella Emmanuel, his hardy hydroxychloroquine’s endorsement, his time spent at golf-courts and his questionable treatment of White House journalists.

“The country’s in the midst of an unprecedented national crisis that’s subjected tens of millions of Americans to suffering and it’s only getting worse,” Meyers noted.