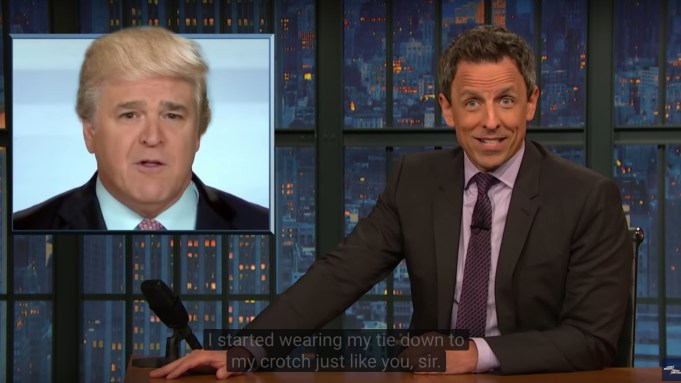 That was one of the visual punchlines in the extended comedy bit on last night’s Late Night on NBC (see it above). Replaying Trump’s on-air phone call to Hannity’s show from the other night, Meyers had as much trouble hanging up on the topic as the Fox host had disengaging from his “meandering” Oval Office buddy.

“Yech,” said Meyers. “What a suck-up. ‘I don’t see George Washington either, sir. You’re so funny, sir. I wish I could tailgate with you, sir. Do you like my new haircut, sir? I started wearing my tie down to my crotch just like you, sir.’”

When Hannity struggled to fob Trump off onto Laura Ingraham, whose Fox News show was running late due to the president’s long-winded phoner with Hannity, Meyers likened the spectacle to just every family’s holiday tradition.

“They’re just passing him around like when your grandpa calls on Easter and everyone has to take turns saying hello,” Meyers said, then slipped into character as the put-upon grandson: “Uh-huh, uh-huh, uh… Oh! Here’s Karen, I’m going to hand you to Karen…”

Check out last night’s Closer Look above (Meyers also goes for The Wall, Hope Hicks and “whatever the hell is growing” on Don Jr’s face. Any guesses as to what Meyers thinks Junior’s growth resembles? No cheating…