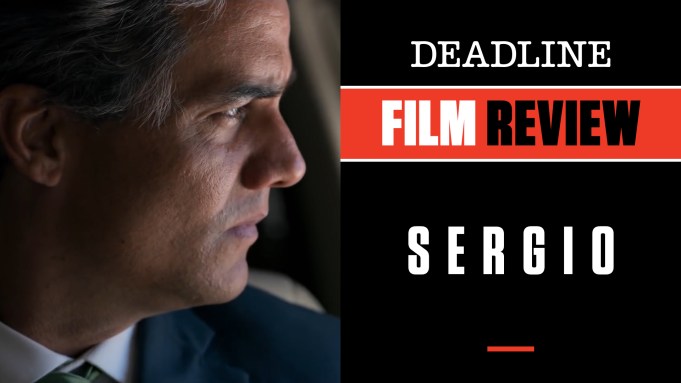 Sergio Vieira de Mello was an important and major player on the international stage for more than three decades. As the United Nation’s top diplomat from Brazil, he was known as Mr. Fix-it — a man who had a unique ability to negotiate peaceful settlements in some of the world’s most dangerous hot spots. He was as close to a rock star as the United Nations has seen, and many thought that one day he would take on its top job as Secretary General.

In 2003, he reluctantly agreed to take on one more tough assignment as the UN’s Special Representative to Iraq, at a time when the American invasion made the region a hot mess. His office was headquartered at the Canal Hotel, where he became a target of an al-Qaida bombing that killed him and 20 members of his staff.

Director Greg Barker made a critically acclaimed 2009 documentary of Vieira de Mello’s life (also titled Sergio) that premiered at Sundance that year, and 11 years later he revisits his story in a new narrative version that debuted at this year’s Sundance. It stars Wagner Moura, the Brazilian star who is best known for his Golden Globe-nominated role as Pablo Escobar in the Netflix series Narcos, and Ana de Armas as Carolina Larriera, a UN economist with whom he had a long-standing romantic relationship in the later years of his life.

What Barker and Oscar-nominated screenwriter Craig Borten (Dallas Buyers Club) have achieved is not only a fitting and inspiring film tribute to Vieira de Mello’s incredible achievements but also the kind of old-fashioned romantic drama set against the globe-hopping exploits of its subject. This is simply not the kind of adult-skewing entertainment we get to see much from studios anymore, so I say thank God for Netflix, which saw the potential in the dramatic power of this true story that deserves to be told again, especially in an era where our political leaders are generally far from the heroic example set by the likes of Vieira de Mello.

The film basically focuses on the last three years of his life, particularly a tricky assignment in East Timor, where Indonesia was fighting off militant incursions, as well as the budding romance with Larriera that gets considerably steamy and combustible in the hands of the attractive and sexy pairing of Moura and de Armas. The latter was a Golden Globe nominee this year for Knives Out and soon will be seen opposite Daniel Craig in the James Bond film No Time to Die. She not only brings great beauty and sensuality to the role but also empathy and sharp intelligence.

The Iraq bombing serves as counterpoint as Borten’s script uses that as a way to separate the tragic present from the recent past of Vieira de Mello’s life, professionally and personally (including scenes involving his two teenage sons). It’s gut-wrenching, harrowing and sad to watch as he and an associate next to him, Gil Loescher (Brian F. O’Byrne), are trapped under the bombed-out ruins of the building, unable to move and getting progressively weaker and more disoriented as rescuers try to free them. Barker brings his cameras back to that scene several times, and it is an enormously effective and nonlinear approach.

Although using his real name, the character of Loescher is a composite of several people, since the real Loescher was actually only in the building to interview Vieira de Mello the day the explosion took place. You might say it is a strange choice to use his real name, if not his actual story, but it is for me a minor quibble considering the overall impact and truth of the man at the center of this drama. That said, O’Byrne is superb in the role, as is Bradley Whitford, who expertly and compassionately plays U.S. diplomat and Vieira de Mello’s friend Paul Bremer. Moura is excellent and should see his international star should rise after this film is seen. And I hope it will be. It is entertaining but also important, and easily one of the best offerings from Netflix this year.

Producers are Brent Travers, Daniel Marc Dreifuss, and Moura are producers. Netflix begins streaming Sergio on Friday, and it is a shame this isn’t able to get theatrical play as well because it has true cinematic scope and would be a great big-screen experience. Check out my video review with scenes from the film at the link above. Do you plan to see Sergio? Let us know what you think.

And by the way, the score from Fernando Velazquez is superb, and I only wish Netflix would please stop cutting end credits after 14 seconds (or close) so I could have heard more of that as well as the Brazilian-flavored song at the end. Let the credits play and honor the artisans who make these films. Putting a barely visible little symbol on the top left-hand corner that if pressed supposedly would continue playing the credits did not work, and the screen went directly into a gross promo for Tiger King. Talk about instantly breaking the mood and impact of this terrific film.