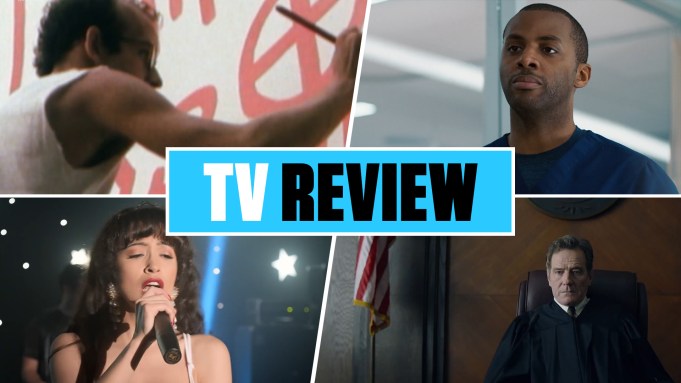 Hanukkah is just around the corner and Christmas is only a couple of weeks away, but the gifts are already piling up on the small screen.

This weekend sees the return of Blue Bloods on CBS tonight for its 11th season, Showtime’s Shameless is back for the start of its final season on December 6 and Starz’s Power Book II: Ghost begins the second half of its first season that same night. However, it isn’t all veterans, as a sleigh full of newbies are on offer too.

One of which will be the show that you have to watch – as you can discover in the video review above.

Netflix had the launch of Selena: The Series today in the first of the Moises Zamora-created show’s two parts. With The Walking Dead’s Christian Serratos in the title role of the Tejano superstar, the nine-episodes of Selena: The Series Season 1 has already proved a strong trending topic online.

Following the rags to fame and riches rise of Selena before her fatal shooting in 1995 by the former head of her fan club, the series centers on the Corpus Christi-born singer’s family and the Mexican-American experience as much as the icon and bestselling performer herself. A coming of age drama in many ways, Selena also features Ricardo Chavira as patriarch Abraham Quintanilla, Gabriel Chavarria as Selena’s brother AB, with Noemí Gonzalez, Seidy López, Madison Taylor Baez, Jesse Posey, Paul Rodriguez, Jr., Hunter Reese Peña, Julio Macias, Carlos Alfredo, Jr., Juan Martinez and Daniela Estrada.

Already a superstar when he died of AIDS-related causes in 1990, Keith Haring has become one of the most successful artists of our time in the decades since his passing. Premiering tonight on PBS stations, American Masters – Keith Haring: Street Art Boy examines its subject life, art and legacy though interviews with Fab 5 Freddy and Ann Magnuson, among other mavericks of NYC’s 1980s arts scene.

As a part of American Masters 34th season, the Ben Anthony-directed documentary also features Haring’s parent and the voice of the man himself through extensive and revealing taped interviews he gave back in the day.

As many other networks have had to do because of COVID-19, NBC is filling out some of its primetime schedule with imports like Nurses. Debuting on December 7 and December 14 right after The Voice, the Canadian medical drama moves to Tuesdays at 10 PM starting January 5 next year.

Set in a downtown Toronto hospital, the series focuses on a rookie crew of young medics and stars Riverdale alum Tiera Skovbye, Natasha Calis, Jordan Johnson-Hinds, Sandy Sidhu, and Donald MacLean Jr. Produced by much of the creatives behind Rookie Blue, Nurses debuted in Canada in January 2020 to near record-breaking viewership. As a further insurance policy for NBC, the show has already completed production on its second season.

FUN FACT: NBC now finds itself in the unique position of having a series called Nurses for the second time. The now Comcast-owned had a sitcom called Nurses debuting in 1991. The Empty Nests spin-off ran for three seasons.

Bryan Cranston returns to cable with Your Honor, which begins on Showtime on December 6. The Peter Moffat-showrun limited series features the Breaking Bad actor as a New Orleans judge who pulls favors and cuts corners to cover up his son’s asthma induced accidental hit and running killing of a crime lord’s offspring.

So, you know the drill – watch the video above to see which one is the show you have to watch this week.