Continue to Deadline SKIP AD
You will be redirected back to your article in seconds
Skip to main content
April 13, 2020 6:22pm 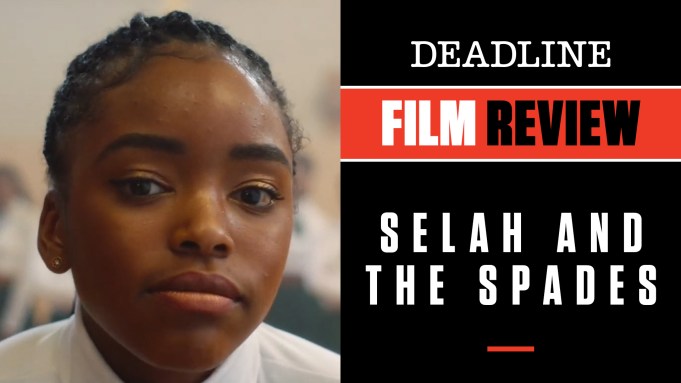 Selah and the Spades, a new teen film Amazon Studios picked up at the 2019 Sundance Film Fesitval, where it was well-received, is the perfect movie for the Trump era in that it is all about a lot of self-possessed high school teens in an elite Eastern boarding school who carve themselves up into factions dividing the campus, politically concerned only about what it means for them. You’ve heard of the greatest generation? This group is the next generation — and it’s not pretty.

That’s what I got out of this impressively made but something of a downer directorial debut from Tayarisha Poe, who also wrote the script. It centers on the social structure of Haldwell, a Pennsylvania boarding school where we see the students rarely getting an education but always dealing on cell phones and texting, competing essentially with one another in one of five factions known as the Spades, the Sea, the Skins, the Bobbies and the Prefects. This is a loooooong way from the Sharks vs the Jets, folks.

However, it is the Spades who seemingly wield all the power, and particularly their titular leader, 17-year-old Selah (the terrific newcomer Lovie Simone), the senior Spirit captain who is in charge of all the acid, coke, liquor and other like goodies that the Spades supply to the student body. If she is learning anything at this place, it is how to fast-track entrance into the mob. She is obsessed with perfection but, like many so-called leaders in this era, very insecure of her own standing in not only this world but the world in general.

That said, selah is one tough and calculating cookie. Her No. 2, Maxxie (Emmy winner Jharrel Jerome), would seem to be the heir apparent, but he made a fatal mistake and got a girlfriend. That’s a non-starter in Selah’s operation; she has no apparent interest in romance of any kind, just keeping the dope alive as it were. “When you are 17, you gotta grab control anywhere you can,” we hear her say. Instead, Selah has her focus on sophomore Paloma (a very fine Celeste O’Connor) as someone perfect to take over when needed, but it becomes a little bit too “All About Eve” (a reference Gen Y’ers likely will scratch their heads over), and that could mean trouble. Never outshine the boss.

Poe reportedly attended one of these schools herself, but I hope the story she has dreamed up is a big piece of fiction and isn’t close to the reality of what she experienced. But recent news reports of students partying on spring break as coronavirus raged on tells me there is lots of truth to the insular environment in which Selah thrives. Some of the film is sort of funny in the same way the dark comedy of Heathers was; mmaybe that was a movie that inspired Poe to pay it forward by changing it up a little and refreshingly zeroing in on people of color, not exactly the usual demo you find in Hollywood movies set in elite schools. Hard to believe that Heathers is 31 years old, but it still has its influence. This one might too, if the planet continues to spiral downward.

Poe definitely has the filmmaker chops, and she makes this indie nicely independent in spirit and style. And style is everything here in the way it was shot, especially when Selah opens her treasure chest of illegal substances that is photographed (Jomo Fray is behind the camera) with the glory of the Second Coming. The talented young cast could not be better, and no doubt will be heard from again. Simone and O’Connor are truly exceptional. Among the adults, Jesse Williams has some nice moments as the headmaster. The soundtrack also is really cool too and not at all predictable, which is a big plus.

Amazon apparently picked this up at 2019 Sundance with the intention of also spinning it off into a TV series, and it would be interesting to see where they take it. Producers are Lauren McBride, Drew Houpt and Lucas Joaquin The streamer skips theatrical and plays it beginning Friday. Check out my video review with scenes from the film at the link above.

Do you plan to see Selah And The Spades? Let us know what you think.