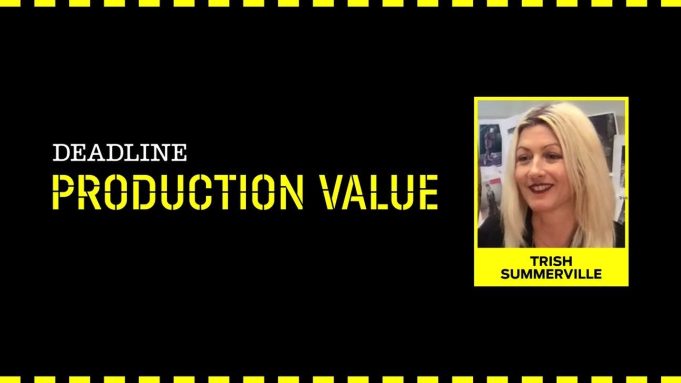 On the Apple TV+ series See, costume designer Trish Summerville was tasked with crafting looks for a world without sight.

Created by Steven Knight, the sci-fi drama is set in a dystopian future, where all but a few individuals are born blind, forced to learn how to survive and interact with others, by relying on their remaining senses.

Contributing heavily to the series’ worldbuilding through costume, Summerville was inspired daily by the degree of creative freedom she experienced on set. “With See, what was very interesting was, we could kind of create whatever we wanted to create. I was never told, ‘No, we can’t do that,’” she says, in the latest installment of Deadline’s Production Value video series. “Every day, it was like, ‘Okay, show us how you want it. Okay, we’ll make it.’”

Doing “massive amounts of research” prior to embarking on any shoot, the designer’s looks were informed by contemplation of the past, as well as the distant future. “With this one, I did a lot of cultural and ethnic and tribal research, just trying to go back to basics,” she explains. “Also, going back…Say, if we went back four to six hundred years from now, what were we dealing with as a civilization then?”

Given the nature of See’s world, each and every costume was made out of materials you might not expect to see on screen, serving the purpose that they do. “It was like bringing them a wad of telephone wire and being like, ‘I want to make this into a corset,’” Summerville explains. “Every day was just another really great adventure of what we could make out of trash.”

In designing costumes for the series’ blind tribes, Summerville found herself thinking in depth about the senses of sound and smell, and how they might be integrated into her cast’s wardrobe. While navigating the wilderness of New York, tribesmen would rely on scents to identify members of their tribe, and to ward off bugs and animals.

Prior to production, Summerville asked her crew to gather materials from their yards and neighborhoods, which could contribute to the costumes’ scents. “We literally went out and collected different types of botanicals, all kinds of plants, rusted objects, and nuts and fruits,” the costume designer says. “We would boil things in fabrics to see what colors would come up; if they retained smell, how long their smell could be retained for.”

Embodying the implementation of sound in costumes, and the out-there aesthetics of See, was Queen Kane, the Divine Ruler and monarch of the Payan Kingdom, portrayed by Sylvia Hoeks. “[One of her dresses], we had made in sound, with bells, so when she walks into a room, everyone’s aware that she’s arriving,” Summerville says. “She has these rings that she shakes, [so] that when she calls to order her kingdom, everyone knows that it’s her.”

One of the most memorable facets of Kane’s costume was her crown, which featured spikes made out of silver chopsticks. “The region that they reside in is kind of New York, so I came up with this idea of Lady Liberty—that somewhere along the heritage, all of these things have come up of the Statue of Liberty, with her crown,” the designer says. “So, it’s trickled down, in this madcap kind of idea, because [the rest of the kingdom doesn’t] really know what the Statue of Liberty is.”

For Summerville, one of the biggest challenges of See had to do with the handmade quality her costumes had to embody. Of course, in a dystopian future in which the blind lead the blind, sewing machines wouldn’t play a major role in the creation of clothes. “We had so much handwork done on the garments,” she says. “We had an amazing team of sewers and stitchers that all they would do was just handwork, because of the way all the garments were finished.”

Starting her work in the costume department in the early 1990s, Summerville got one of her big breaks in 2010, when she was hired by David Fincher to design costumes for The Girl with the Dragon Tattoo. An Emmy nominee who designed the pilot for Westworld, Summerville has gone on to further collaborations with Fincher, on Gone Girl, as well as the director’s upcoming drama, Mank.

To take a look at our conversation with Summerville, click on the video above.