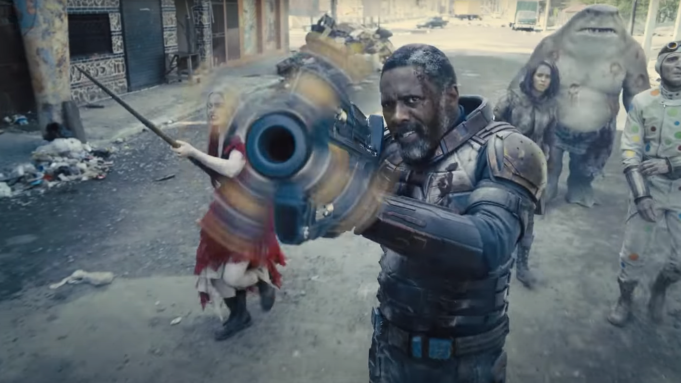 Whatever the case, trailer two is now roaming free on the Internets.

Whereas the first trailer established the characters and the mission (sort of), the new trailer is more focused on Idris Elba’s Bloodsport and efforts by Viola Davis’ character, Amanda Waller, to recruit him. We also get to meet Sean Gunn’s Weasel, who comes in for a bit of Rocket Raccoon-style ribbing (Gunn, who is the director’s brother, did motion capture on that Guardians of the Galaxy character, who was voiced by Bradley Cooper). We also get to hear the Sylvester Stallone-voiced King Shark speak.

As opposed to the dark, moody tone of David Ayer’s 2016 Suicide Squad, Guardians director Gunn’s sequel is bright and colorful, and looks to be set largely in a Latin American country where the revamped Suicide Squad has been sent in to destroy “something only known as Project Starfish.” Enter Starro

While we only get glimpses in the trailer, they are enough to confirm that the Suicide Squad will face a classic D.C. villain:, “Starro the Conqueror.” Starro is an intelligent alien lifeform resembling a giant starfish who comes to earth bent on world domination. In the comics, he is the first villain faced by the Justice League in 1960.

Speaking of the Justice League, Viola Davis’ Amanda Waller says at the the opening of the new footage that Bloodsport is “in prison for shooting Superman with a Kryptonite bullet.”

In fact, Gunn this morning tweeted a comic panel in which a hospitalized Superman has been shot by Bloodsport with just such a bullet. Does this mean a Squad cameo for Superman, or is it a McGuffin?

Gunn also dropped a new poster for the film on Tuesday.

Heroes – while supplies last. #TheSuicideSquad See it on the big screen August 6. pic.twitter.com/TAPiqvOJ9G

The Suicide Squad hits both theaters and WarnerMedia’s HBO Max streaming service on the same day, August 6. The first movie opened to $133.7 million at the domestic box office, setting an August opening record; it went on to gross $325.1 million stateside and $746.8 million worldwide.