Continue to Deadline SKIP AD
You will be redirected back to your article in seconds
Skip to main content
January 12, 2022 1:19pm 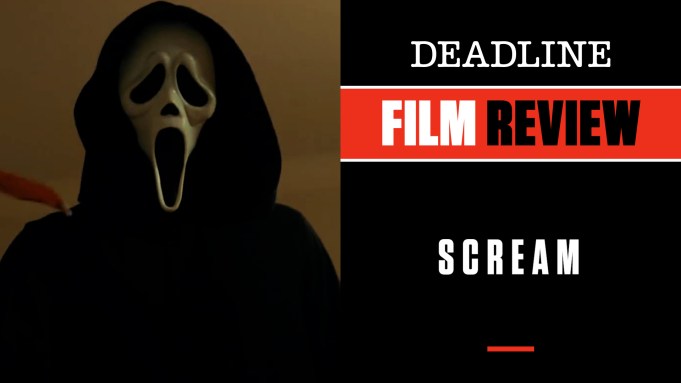 Revived from the ashes of the Weinstein Company, Scream’s funny and self-aware 2022 reboot turns out to be a smart play for Paramount and Spyglass Media Group which have landed the rights, and judging by the way it evolves you can bet on a new series of sequels ala Halloween, one of many movies in the genre this movie has fun skewering. SPOILER ALERT: Some plot points and characters are revealed below and in accompanying video.

Kevin Williamson came up with the concept for the first one in 1996 (expertly directed by horrormeister Wes Craven, to whom this new film is dedicated) and consulted on this reboot directed by Matt Bettinelli-Olpin and Tyler Gillette and written with a sly wink at the whole genre by James Vanderbilt and Guy Busick. In pure Scream tradition, this is a horror franchise that breaks the fourth wall in witty ways to play essentially as a movie-within-a-movie, constantly commenting on the state and artistic value of the well-worn commercial horror flicks and having characters predict what will happen plot-wise based on past movies but still having its cake to eat too by delivering the necessary quota of grisly stabbings.

The “legacy” cast (also mentioned by new stars in this as a must in the new age of horror reboots — “you can’t have Halloween without Jamie Lee!” exclaims one cast member) wisely also is brought back in significant roles so fans can revel in the presence of Courteney Cox, David Arquette and of course Neve Campbell merged with a well-chosen new group to carry on the franchise no doubt.

The ripe satirical edge is set pre-credits in a kitchen sequence where teenage Tara (Jenna Ortega) receives a phone call from none other than “Ghostface,” the mask-clad killer and linchpin of the franchise (a la Michael Myers, Freddie Krueger and Jason). He shows her screen shots of her best friend Amber (Mikey Madison), who he swears will be murdered unless she can answer a quiz on horror movies. The cheeky tone is evident right away when she answers the arty The Babadook as her favorite and the caller rejects it as “boring.” Later she begs for mercy by hoping he will ask her instead about other arty “elevated horror” like The Witch or any number of A24 releases rather than the popcorn genre stuff like the fictional Stab that stands in for the type of movie Scream actually is. Failing the quiz, she mercilessly is stabbed seven times by the mysterious Ghostface and winds up in the hospital post-title card credit.

There, amongst a new group of friends (and potential victims and killers) that we are introduced to, along comes her estranged older sister Samantha (an effective Melissa Barrera) with her own baggage and regrets, who reaches out in the unforgiving Tara’s time of need. Turns out her daddy is the notorious Billy Loomis, who was one of two killers in the original Scream (there are always two killers as another cast member assures), and has left lifelong scars, making her the daughter of a serial killer. With the emergence of Ghostface again returning to Woodsboro on a new reign of terror, old memories and fears resurface quickly.

The friends including Sam’s likable bf Richie (a terrific Jack Quaid, son of Dennis Quaid and Meg Ryan), athletic Chad (Mason Gooding), son of Sheriff Judy Hicks (Marly Shelton, returning from Scream 4) Wes (Dylan Minnette), Amber and others get the 411 on what to expect as predicted by Mindy (Jasmin Savoy Brown), who does a virtuoso account of the history and predictable story tropes of popular horror movies. She is terrific in this scene, a highlight of the film, which then focuses on the individual fates of this group. In this sense, Scream doesn’t operate as a typical popcorn horror entry where the same killer just keeps getting revived, but more as an Agatha Christie-style mystery where the main players know one or two of them are key suspects as that Ghostface killer. The fun and surprising success here is the filmmakers craftily keep you guessing right until the end.

We also reunite with a pitch-perfect Arquette as Dewey, a banished lawman now divorced from Cox’s morning-show host Gale Weathers, who suspects the new wave of killings is darker than ever. Scenes with the two of them talking about their failed relationship gain credence knowing the actors once were married. Getting roped in along with those two, of course, is the titular lead of the franchise, the always-tortured but now seemingly happy Sidney Prescott (Campbell). It’s all skillfully interwoven with the new cast and old cast seemlessly intertwined, none of their fates to be revealed here.

Directors Bettinelli-Olpin and Gillette also use the clichés of horror in witty ways, particularly in one scene involving imminent danger for Wes as he showers (yes, even Psycho gets the once-over) and then opening and closing a series of doors and cupboards that don’t pay off in the usual ways. The film squeezes humor in just about every corner.

Devoted fans who have been waiting for a Scream 5 since 2011 (and yes, also skewered is the now-popular habit of just using the original title rather than sequel numbers, calling it all requels instead to justify the practice) will be satisfied, and so will unsuspecting viewers new to the franchise who will find themselves laughing out loud at a movie not afraid to laugh at itself.

Producers are William Sherak, Paul Neinstein and Vanderbilt. Paramount releases it Friday. Check out my video review with scenes from the movie at the link above.

Do you plan to see Scream? Let us know what you think.