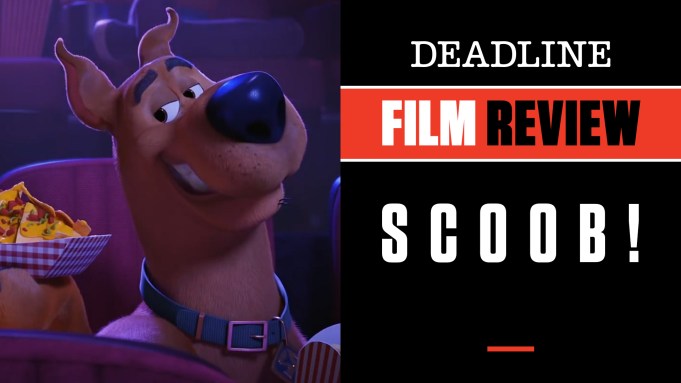 It has taken half a century since the 1969 TV debut of lovable great Dane Scooby-Doo to see an animated feature come to fruition, but its time has come and thus we have Scoob! The Warner Bros toon originally was scheduled to open wide in theaters today, but the studio scrapped those plans because of the coronavirus pandemic and, like Universal’s Trolls World Tour, instead is keeping the date but sending the flick straight to VOD at $19.99 for a 48-hour rental. With entertainment-starved families out there, especially those with lots of kids (the target audience here), business should be brisk.

What they will get for the money is almost like an Avengers-style mashup for Hanna-Barbera fans. Of course, just as in the most recent major Scooby-Doo features in 2002 and 2004, which were live-action, the core characters that fans know and love are back, including the mystery-solving canine star, his best buddy Shaggy, and their friends Fred, Velma and Daphne. Added to the mix for this “big screen” toon version are a number of characters from other H-B properties including Blue Falcon, his robot dog Dynomutt, Captain Caveman, Dee Dee Skyes and Dick Dastardly, the villain of the piece. It all makes for a very busy, very frenetic ride with lots of special effects, gadgets and action galore that sets this apart from the live-action feature predecessors. Plus, this is a first attempt at the Scooby origin story, so popular with reboots of beloved IP in recent times.

We learn Shaggy met Scooby-Doo at Venice Beach, of all places, and a lifelong bond was formed. As he has been for the past two decades, Scoob is voiced by Frank Welker, who took over the assignment from his mentor Bob Messick, the original voice from 1969. Shaggy is voiced sweetly by Will Forte. We see how their branded Mystery Inc. formed with the fellow sleuths Fred (Zac Efron), Daphne (Amanda Seyfried) and brainy Velma (Gina Rodriguez), worth the price of admission just for her Ruth Bader Ginsberg Halloween costume.

Their big mission in this film is to try to stop world-domination efforts by Dick Dastardly (Jason Isaacs), who is hopscotching everywhere around the globe — but for what reason? He teams with the Falcon Force, including Blue Falcon — actually Jr., taking over a little awkwardly from his father, who went who-knows-where. He is voiced by Mark Wahlberg in his first animated VO job ever. Getting all the laughs, however, is sidekick Dynomutt, the robot dog with ambition voiced hilariously by Ken Jeong. Along for the ride is their pilot Dee Dee Skyes (Kiersey Clemons). And once they are dropped on Mystery Island, there is the meeting with Neanderthal Captain Caveman (an unmistakable Tracy Morgan).

The action starts early when Dastardly (a “real Dick,” as someone says) unleashes his robot army of metal menaces known at the Rottens. Pure havoc is wreaked and barely lets up. Scoob, however, has a secret — one that perhaps involves his own superheroics and the need to keep the whole family together, as it were. A perfect goal in this time of pandemic where this film is being unleashed.

Added to the mix here is none other than iconic American Idol and America’s Got Talent judge Simon Cowell, playing himself to amusing effect, In his first scene, Cowell is confronted with a Scooby-Shaggy duet of “Shallow,” the Oscar-winning song from A Star Is Born (just to keep it all in the Warner Bros family, eh?). But fear not, the original cartoon’s theme song is not far behind. Some things are sacred. Kids will eat all of this up for sure.

Tony Cervone directs. Allison Abbate and Pam Coats produce. Check out my video review with clips from the film at the link above.