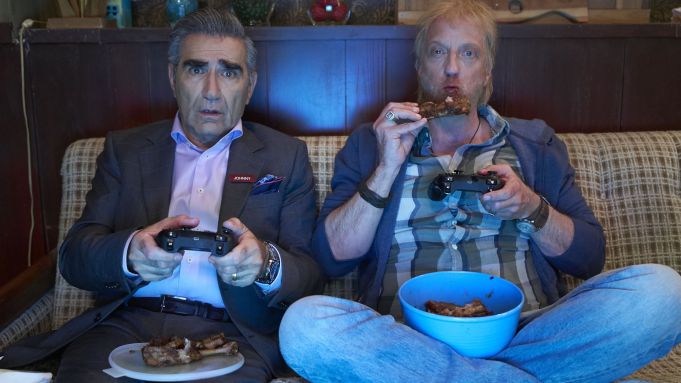 “Are you ready for a total emotional and physical transformation?” Alexis Rose asks in the Season 6 trailer for Pop TV’s Schitt’s Creek. The answer is yes — the comedy is entering its final season fully finding its stride, coming off four Emmy nominations including for Best Comedy Series.

The final season bows on Pop TV and Canada’s CBC on January 7.

The single-camera series might be making its final run, but it’s not going away. In October, Fox Television Stations acquired rights in a two-year deal with Lionsgate’s Debmar-Mercury. It means all seasons will begin airing in U.S. broadcast markets beginning in September 2020.

It is not common for a cable series, especially a single-camera comedy, to be sold in broadcast syndication, especially one airing on a smaller channel like the CBS-owned Pop. But Schitt’s Creek has not been an ordinary series, increasing its ratings every season and growing its popularity beyond TV throughout its run — and fueled by its launch on Netflix.

Commissioned by CBC, Schitt’s Creek is produced by Not A Real Company Productions Inc. The executive producers are Eugene Levy, Daniel Levy, Andrew Barnsley, Fred Levy, David West Read and Ben Feigin. The series is produced in association with CBC and PopTV and distributed internationally by ITV Studios Global Entertainment.