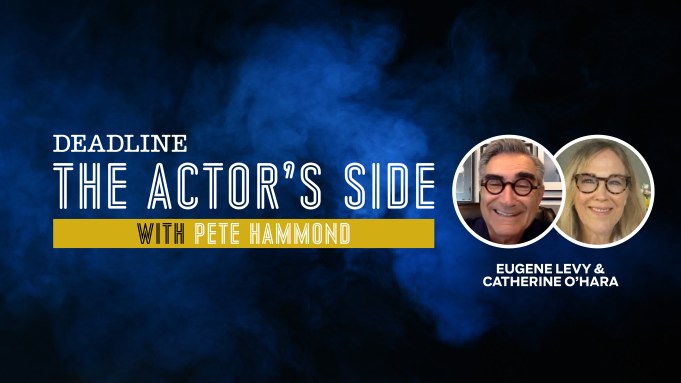 For the first time in the few years I have been hosting my Deadline video series The Actor’s Side, we are featuring not just one star but two in the same interview. Considering the close, 45-plus-year working connection between two of the most famous alumnus from Second City, it made perfect sense to me to invite both Eugene Levy and Catherine O’Hara for a joint appearance to talk about how their careers have intersected for so many decades, culminating (for now) in perhaps their most acclaimed and honored project, the six seasons of Schitt’s Creek. The final season of Pop TV’s comedy series, which wrapped in April, is nominated for 15 Emmys, including noms for both stars and supporting actors Annie Murphy and Daniel Levy, the latter having landed four personal nominations including writing and directing the show he co-created with his father.

Eugene Levy and O’Hara (coming in from her Canadian summer home) talk about what this kind of recognition means to them, how the show evolved and developed, getting O’Hara to commit to doing a series in the first place and so much more about the show. We also find out how the Second City and SCTV experience shaped their lives, their careers and their comedy, plus their own separate triumphs apart from each other, which include two of the biggest comedy film franchises in recent history. Levy talks about what appearing in all eight American Pie movies did for him, while O’Hara reveals the phrase everyone asks her to repeat from her Home Alone films, and she does it for us.

You don’t want to miss this delightful conversation with two comedy greats who also appeared together in four memorable big-screen films Levy co-wrote with director Christopher Guest including classics Best in Show, Waiting for Guffman, and The Mighty Wind. But I couldn’t resist getting their take on the other Levy-Guest creation, For Your Consideration, a scathing look at Hollywood’s infatuation with awards. Considering that Levy and O’Hara are front and center in this Emmy race and awards season right now, I had to know what their FYC characters might think about it all. That is how we start this edition, and get “The Actor’s Side” from Eugene Levy and Catherine O’Hara. To watch just click the link above.