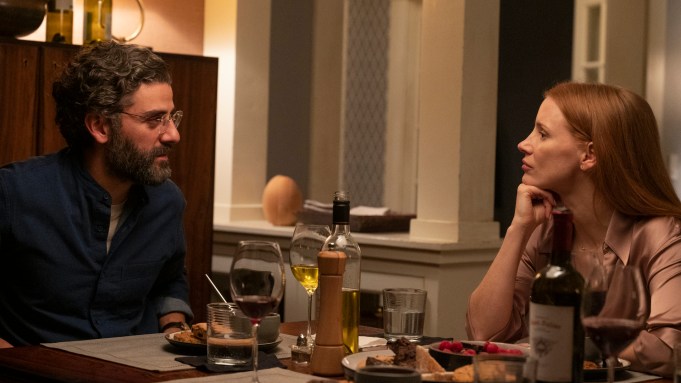 She climbs into bed, with body language telling a story. Before she can speak, he asks, “What is it?”

So opens the first full trailer for Scenes from a Marriage, HBO’s limited series starring Oscar Isaac and Jessica Chastain that will premiere on Sunday, September 12. Check it out above.

Adapted from Ingmar Bergman’s 1973 Swedish miniseries, it re-examines its iconic depiction of love, hatred, desire, monogamy, marriage and divorce through the lens of a contemporary American couple. Chastain plays Mira, a confident, ambitious tech executive left unfulfilled by her marriage. Isaac is Jonathan, a cerebral and accommodating philosophy professor desperate to keep their relationship intact.

The five-part Scenes from a Marriage addresses the complexity of Jonathan and Mira as individuals who ultimately know their marriage isn’t being ripped apart by any one event or flaw. Viewers will eavesdrop on private conversations between two people torn between feelings of hate and love.

The limited series from Media Res and Endeavor Content reunites Chastain and Isaac, who were classmates at Julliard, are longtime friends and starred together in 2014’s A Most Violent Year. Both also executive produce, along with Hagai Levi and Michael Ellenberg via Media Res, Lars Blomgren, Daniel Bergman, Blair Breard and Amy Herzog.