Continue to Deadline SKIP AD
You will be redirected back to your article in seconds
Skip to main content
May 12, 2019 12:22am
2Comments 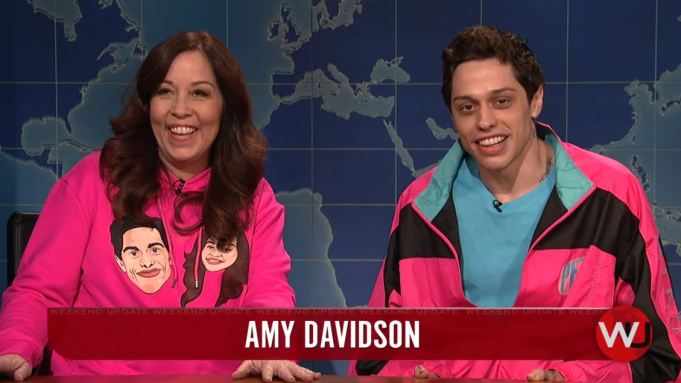 Saturday Night Live got into the spirit on the day before Mother’s Day, with several shout-outs to the holiday on Saturday’s show hosted by Emma Thompson, including Pete Davidson bringing out his own mom during a “Weekend Update” segment.

Davidson in his bit warmed up with some observations about still living with his mother (at least one of which he didn’t seem to be too embarrassed talking about considering she was just off camera). “It’s not like I moved into her house,” he said by way of making sure nobody thought he was a loser. “I just bought a house with my mom, like, a winner.” He added, “But I told her it’s not like a mother-son thing — now we’re just homies.”

His mom, Amy, eventually slid in next to him at the anchor desk.

“What do you guys have planned for tomorrow?, Colin Jost asked them.

“What do you mean? I put her on TV, this is it,” Pete responded. “You don’t know, Jon Hamm could be single and watching.”

See the full skit above.

The NBC late-night staple wasted no time with the mom jokes, with Thompson (who would be fantastic the entire show) during the opening monologue bringing out SNL alums Tina Fey and Amy Poehler for a three-hander about how to decipher mom “code”, like when she says things like “You look tired,” what she really means is “you look bad.”

The theme returned soon after in a taped skit titled “A Perfect Mother” about a new mom (Heidi Gardner) wondering to her own mom (Thompson) how she kept it all together when she was in the same boat — spoiler alert: she far from kept it together.