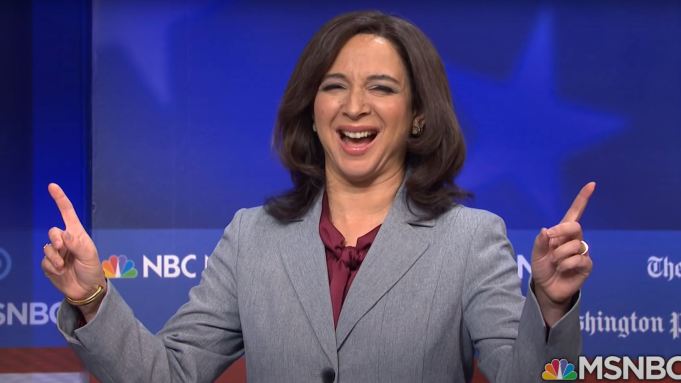 Maya Rudolph’s Kamala Harris is back and fittingly joining her is Jim Carrey’s Joe Biden.

Saturday Night Live gave fans a sneak peek of what the coverage of the presidential race will look like by releasing a new teaser on Thursday. The teaser features a dramatic score a shot that scans the costumes set to make an appearance when SNL returns on Saturday. First is Maya Rudoph’s hanger holding here Harris costume, followed by Alec Baldwin’s Trump hanger, then last is Jim Carrey’s which reads “BIDEN.”

The teaser then switches to Carrey donning makeup to look more like the presidential candidate as he gets a silver wig fitted onto his head. A shot of Rudolph sitting in front of her mirror ready to reprise her role as the VP candidate quickly follows.

As the score comes to its dramatic crescendo, Carrey and Rudolph stand back to back and slowly reveal themselves as Biden and Harris, respectively.

While season 46 won’t be the first SNL season to feature Rudolph as the U.S. Senator, it will be the first to show Carrey as Joe Biden. The former vice president has previously been portrayed by Jason Sudeikis, Woody Harrelson and John Mulaney.

Back when Rudolph learned that Biden chose Harris as his running mate in August all the actress had to say was “that’s spicy.” She went on to say that would be thrilled to return to SNL, even if it means that she play the potential future vp. Rudolph earned an Emmy nomination for her portrayal of the senator, but went on to win two separate awards for her work on both The Good Place and Big Mouth.