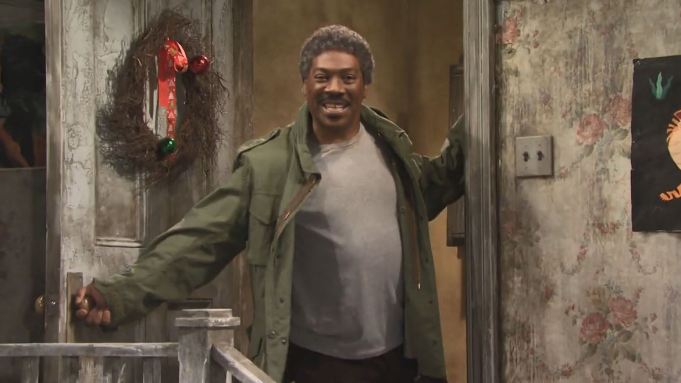 It’s been three and a half decades since Eddie Murphy last reported from “Mister Robinson’s Neighborhood,” and lots has changed. Watch the updated sketch from Murphy’s return to NBC’s Saturday Night Live above.

For starters, Murphy’s popular take on Mister Rogers explains why he’s still able to live in the locality where “white people pay a lot of money and — poof! — all the black people are gone.” That leads to the Word of the Day: “squatter’s rights.” Seems Mister Robinson’s neighborhood is a victim of — “can you say gentrification, boys and girls?”

Nearly on cue, there’s a knock at the door, and we get that priceless, timeless look of surprise.

At the door are his new decidedly non-African-American couple Damien and Mikka. Seems the new giant TV they ordered was delivered but not in the lobby. Does Mister Robinson know anything about.

The calmness flees, and Murphy’s character turns nasty. “Oh, you think I stole your TV because I’m black?!?” As his visitors retreat, he notes how “it works every time.”

Turning to the camera, Mister Robinson tells the boys and girls, “There’s a special word for that: racist.”

Next up is a bit about DNA-testing product 23 and me. Check it out above.