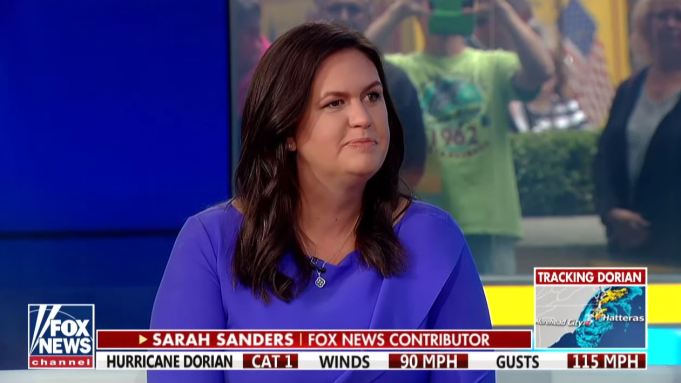 Sarah Huckabee Sanders gets to speak for herself now that she’s no longer White House Press Secretary, and today marked her on-air debut as a Fox News contributor. Roll the tape above.

The longtime mouthpiece for the Donald Trump administration and possible future Arkansas gubernatorial candidate answered a few questions about her life — being able to spend more time with her kids and whether she has endured any personal attacks since leaving the White House — along with weighing in on such political topics as the 2020 Democratic presidential field and the August jobs report.

Debuting on F&F‘s monthly live program, Huckabee Sanders chatted with co-hosts Steve Doocy, Ainsley Earhardt and Brian Kilmeade about her decision to leave the White House two years after she replaced future Dancing with the Stars hoofer Sean Spicer as press secretary. She also offered the full-throated support for Trump that was her trademark in the old job.

“At the end of the day,” she said, “there is no question that the president and his administration have turned the country around and put it on the right track. … And we are doing better under this president that we have in the previous eight years.”

You just know that made his Executive Time great again.