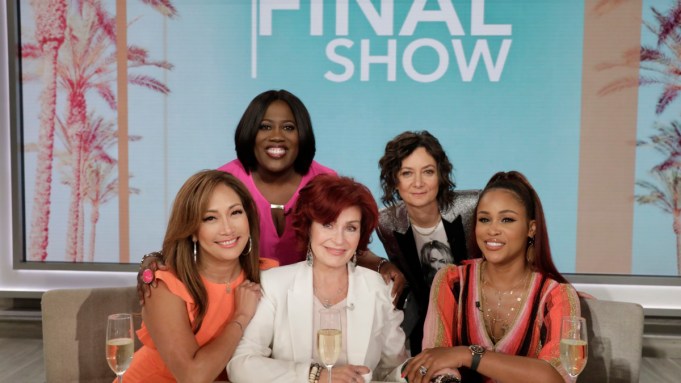 Sara Gilbert has said an emotional goodbye to The Talk. Her final episode on CBS’ daily show, which was pre-taped, aired Friday, and brought out tears from her and her co-hosts. Gilbert also was treated to a surprise musical performance by her wife Linda Perry and daughter Sawyer. You can watch clips from the show above and below.

“I went to put my thoughts together, and… I thought, ‘What do I say?'” a tearful Gilbert said. “It was just a cliché of not having words.”

Gilbert said she wanted to share a story from “the beginning of the show.”

“I really wanted Sharon (Osbourne) to be on this panel, and I fought for her to be here, and she wanted to do it, and I was so grateful,” Gilbert recalled. “I know this is, like, completely unprofessional, but right after she got the job, I called her and I was like, ‘I don’t know what I’m doing. How do I do this?’ And she said, ‘Just be yourself.’

“And you gave me permission to do that over these years,” Gilbert continued, “We’ve shared so much together – so much joy and pain. And, we’ve been there with each other and for each other through so many moments, and I have to figure out how to not see you every day, but I’m gonna be sitting in your yard or something. I love you, and I know this is not a goodbye and that we’re going to be in each other’s lives, and I’ll make sure of that.”

A clearly emotional Osbourne could not hold back tears. “I hate doing this,” said Osbourne, shaking her fists in the air. “Why did you make me do this?”

“Coming every day and seeing Sara… she can read me, I can read her, and if there’s anything on my mind, I tell Sara,” Osbourne said. “And, it’s like now I won’t have Sara here.”

Osbourne went on, “It is like not having your sister with you anymore, and it’s gonna be hard, but she only lives down the road,” as both she and Gilbert broke into laughter. “I will be paying her many visits, and she’s not going out from any of our lives. She’s here.”

Gilbert announced in April that she was leaving the daily show as co-host at the end of the season. That news came just over two weeks after ABC announced it has ordered a second season of Roseanne spinoff The Conners, on which Gilbert stars and produces, after series’ producer Werner Entertainment secured new deals with the core cast of Roseanne veterans, including Gilbert.

Co-host Sheryl Underwood recalled what she said to Gilbert the day she was interviewed for the job.

“I said, ‘Whatever you do, keep this going for other people,'” the comedian remembered. “You care about so many people. You created something that gave a lot of people a lot of work, but you opened a lot of us into your lives. You didn’t know us from Adam… to be invited to your wedding, as your wacky, black cousin…” she said with a laugh.

Underwood also complimented Gilbert for being “a great businesswoman.”

“You’ve gotten me out of my comfort zone,” she said, “and everybody needs a good friend that knows that there’s more in you than even you understand, and you bring that out of people.”

Carrie Ann Inaba admitted she was initially “intimidated’ by Gilbert but has found that her co-host has “the most beautiful and sensitive and compassionate heart.”

Inaba added: “What I love most about you, is that I have learned so much about how to have integrity with myself” as Gilbert expects the women to be their authentic selves.

Eve praised Gilbert for being “so sweet and… so loving.”

“You’ve helped me be more honest,” she said, adding with a laugh, “I feel smarter sitting next to you.”

Gilbert will be replaced by Marie Osmond.