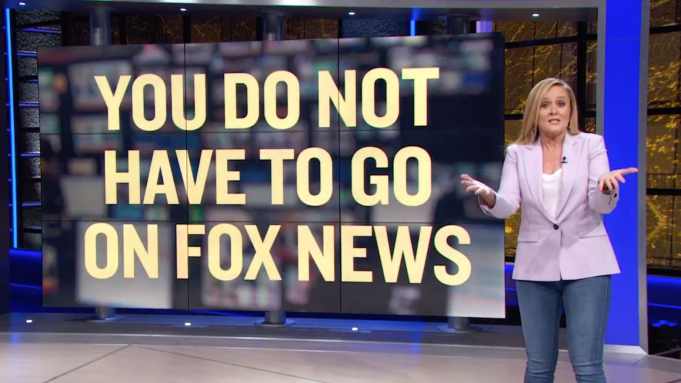 “What a touching reception for a network that doesn’t believe his sexual orientation entitles him to a wedding cake,” Bee blasted.

Fox News Channel town halls have become a dilemma for Dem candidates, she acknowledged, particularly after Vermont Sen. Bernie Sanders did one and drew biggest town-hall crowd this election cycle to date.

Senators Elizabeth Warren and Kamala Harris have refused to go on the cable net to town hall which, even some non-Fox News talking heads have declared a mistake. To that point, Bee ran a clip of various talking heads suggesting any candidate afraid to go on FNC should not be POTUS, and one of MSNBC’s Willie Geist arguing any Dem who thinks town hall-ing with Bret Baier or Wallace is somehow endorsing the views of Hannity, is “just wrong.”

‘If you think Elizabeth Warren and Kamala Harris are scared of talking to anyone, have you met them?” Bee argued, showing clips of the two candidates shredding Justice Brett Kavanaugh and a Wells Fargo bigwig during senate committee testimony.

“Every time one of these women talks to a Republican it ends out on a shirt,” Bee enthused.

It’s not a complex issue, she insisted:

Where you talk to voters matters, Bee argued. “As Elizabeth Warren put it when she refused to appear on the network, Fox News is a “hate-for-profit racket,” Bee reminded.

Bee then ran a clip of Fox News morning show deliberately misrepresenting a point Buttigieg made on his FNC town hall to whip up its base, making her point.

“I am sure it is not morally the right thing to do,” Bee argued. “When you go on Fox News, no matter how lit your town hall game is” you are legitimizing them.”