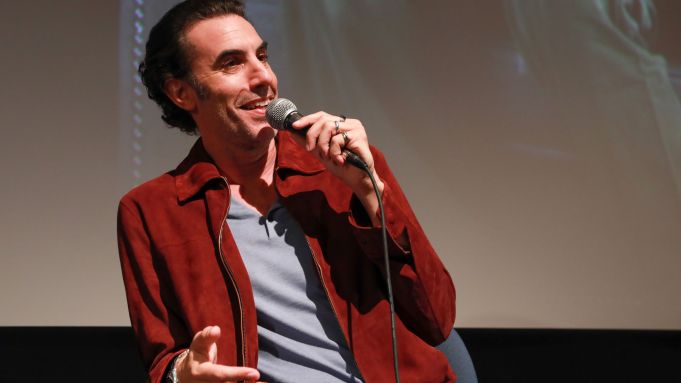 At the Deadline Emmy season screening of Showtime’s Who Is America, Sacha Baron Cohen held a packed house rapt. At the Landmark Theater, he gave a humorous tutorial that was the equivalent of a magician explaining his repertoire of magic tricks. Baron Cohen discussed in detail the painstaking work that went into developing a coterie of characters well drawn enough to fool myriad politicians, journalists and the former vice president of the United States, Dick Cheney. Like he did with the films Borat and Bruno, Baron Cohen over seven episodes got people we see as credible on television to reveal often shocking facets of themselves, and more than one paid the price in threatening to sue, and ultimately, being forced to step down.

Baron Cohen said the impetus was the election of Donald Trump, and the volume of friends who emailed feeling helpless and demoralized. “After Bruno, I vowed never to do this again. I thought after Borat, it was a great idea to go with another undercover character, and it was terrifying and I thought there must be a better way to make a living, rather than kissing a naked man in a cage, while 2000 rednecks tried to get in the cage to stop us from kissing each other. I vowed never to do it again and then Donald Trump got in. Quite seriously, I don’t know if you remember those first couple of months. It was shock and awe; suddenly the most disgraceful things were happening on a weekly basis. I think it was the Muslim ban, came into effect, or whatever it was called at the time, sensible immigration of people who just happened to be from certain Arab countries. But not others. And I felt angry. My friends were emailing me articles, I was passing them along and I thought, this isn’t enough. I had to do something about it.”

The chair throwing conclusion of Bruno was perhaps the closest Baron Cohen came to being injured. In Who Is America, trying to get O.J. Simpson to admit he committed two murders was unnerving, but he became the most frightened when his character Dr. Nira Cain-N’Geocello visited Kingman, Arizona to rally locals around the economic benefits of building a Saudi Arabia-sponsored mosque adjacent to a Safeway. He said that after locals shouted him down, he feared they exited the meeting to return with the firearms they left in the car. He exited quickly, noting had he stayed, it might have been the inverse of a mass shooting, when one shooter aims at many. Here, he feared, the many would be aiming at just him.