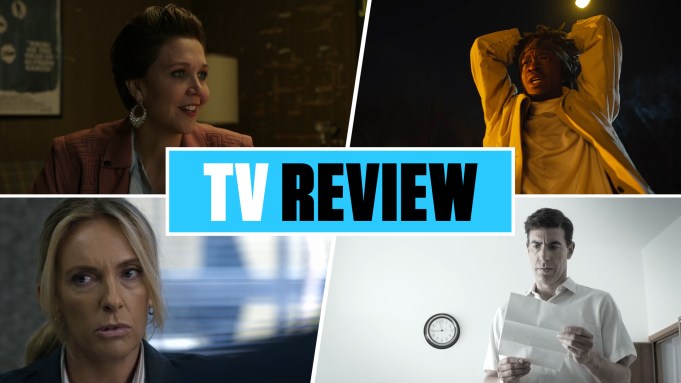 You know it’s September when the NFL is back tonight for the kick-off of its 100th season, TIFF is in full flight, the 71st Primetime Emmys are just around the corner and the new TV season is just a couple of weeks away from launch.

However, with all that action, there’s also a lot of competition for your attention on the small screen and only one show can be the one you have to watch this week. To find out who is taking the gold medal this week, check out my review video above.

Launching tomorrow on Netflix, The Spy stars comedy master of disguise Sacha Baron Cohen in a very dramatic role as a newly recruited Mossad agent who goes undercover in Syria and leads a double life as a partying importer/exporter to penetrate the upper ranks of the Arab nation and their plans to attack Israel. Based on real life spy Eli Cohen (no relation to the Who Is America? frontman), the 1960s-set six-parter was created by Gideon Raff, who came up with the show that inspired Homeland, and co-stars The Americans alum Noah Emmerich, Homeland’s Hadar Ratzon Rotem, and Colony’s Waleed Zuaiter.

The last eight-episodes of the George Pelecanos and David Simon created The Deuce sees David Krumholtz, Daniel Sauli, Sepideh Moafi and Olivia Luccardi now upped to regulars and one or two familiar but surprising faces on-board as well.

Based on the real events in the Marshall Project and ProPublica Pulitzer-winning 2015 article “An Unbelievable Story of Rape” and the This American Life episode “Anatomy of Doubt,” Unbelievable unfolds on Netflix on September 13.

Emmy winners Toni Collette and Merritt Wever play detectives trying to track down a serial rapist in the Susannah Grant created CBS TV Studios eight-parter. Booksmart’s Kaitlyn Dever portrays a teen who files a police report of being sexually assault but is later charged with lying to get attention – and even begins to doubt herself in the Katie Couric EP’s limited series.

Of those four, which one is the one show you have to see? Watch my review video above to find out.