Continue to Deadline SKIP AD
You will be redirected back to your article in seconds
Skip to main content
March 5, 2021 10:42am 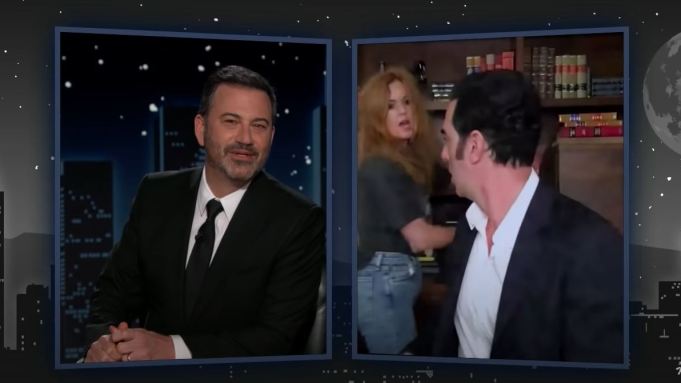 This was no Borat bit. This was real. And it was disturbing.

OK, not really, but Jimmy Kimmel Live! fans got a faux look at the seedy underbelly of black-market Covid vaccine slinging Thursday night as Sacha Baron Cohen did a virtual interview with the host of ABC’s late-night show. With Kimmel playing smirking straight man, the Borat Subsequent Moviefilm star kept taking phone calls during their chat — and it was apparent that he was up to no good.

Answering his flip phone mid-sentence, Baron Cohen said: “Bono? Ah hey man, what’s up?” He then reaches back to a mini-fridge stocked with small bottles of clear liquid. “I got, uh, AstraZeneca. I’ve got some Pfizer. Whattya want?” He mumbles a few more words and grabs a few vials.

Kimmel speaks: “Did I hear you correctly — was that Bono?”

The pusher replies: “Nah, it was a different Bono. It was Chaz Bono.” He then slipped back into their previous conversation as if nothing had happened — until another cell phone rang.

Kimmel came back on and said, “I don’t meant to pry, but are you selling vaccines?”

Baron Cohen leaned into the camera with menace aforethought and said: “Stay out of this, Kimmel. All right? Look after that pretty face of yours. There’s no vaccine for broken legs.”

The “interview” went on from there, interrupted by calls from other celebrities, until his disheveled, clearly jonesing wife Isla Fisher shows up — and begins slamming vax vials like 5-Hour Energy shots.

Watch it all play out above.