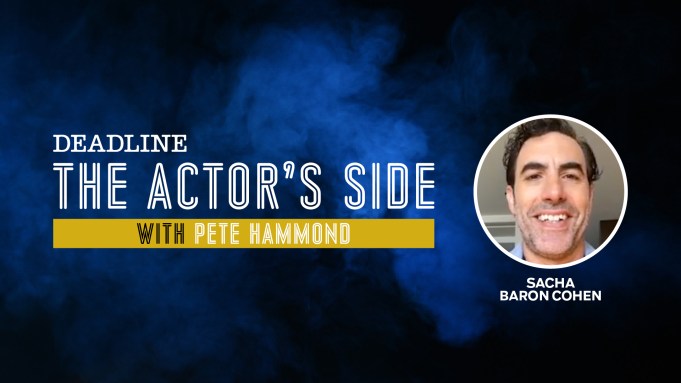 Sacha Baron Cohen had a very good morning. He personally received three, count ’em three, Golden Globe nominations, tying a record for the Globes. That means he is up for Best Actor – Musical/Comedy for Borat Subsequent Moviefilm, Best Supporting Actor for his role as Abbie Hoffman in The Trial of the Chicago 7, and as a producer on Borat in the Best Picture – Comedy/Musical category. Not bad, but Baron Cohen has been expected to be a major player this awards season for his unique contribution to both these films since their fall debuts, each becoming not only hits for their respective streamers Netflix on Chicago 7 and Amazon on Borat, but also for social impact.

Thus this week’s episode of my Deadline video series The Actor’s Side is perfectly timed for my conversation with this unique actor of this moment.

We talk candidly and in detail about his reasons for bringing the Borat character back to the movies when Baron Cohen thought he never would. It was in part the U.S. election, his fear of Donald Trump winning and the potential loss of American democracy, and a desire to use comedy to reach voters about the importance of what their vote might mean. He also talks about the dangers of social media and how Borat, with his own extreme views and methods, offers up some subtle, and not so subtle, political satire.

He also talks about the timeliness of Chicago 7, which today also grabbed several other Globes nominations including in the Best Picture – Drama category, and his well-over-a-decade determination to play Hoffman on film, first contacting Steven Spielberg 13 years ago when he initiated the idea of a Chicago 7 movie, all the way through to Aaron Sorkin who wrote it and would eventually direct it as well. His own connection to Hoffman he says actually came in college, when he wrote his thesis on Jews and the civil rights movement — one that included Hoffman’s contributions. Baron Cohen also talks about the particular challenge of the role, including a very particular Boston accent he had to master, the first time ever he has done an American accent in films.

We also talk about his unique career thus far, with two distinct paths: one working on films that he writes, and one working for great directors in movies like Hugo, Sweeney Todd, Les Miserables and of course Chicago 7.

For those with less time on their hands you can check out the 12-minutes-plus edited version of our conversation in the video above, but I urge you to click  below for the uncut half hour in which we cover so many other things — including our mutual obsession with Peter Sellers. Baron Cohen reveals some previously unknown thoughts about that highly influential actor and his impact on the paths he has taken in his own career. In my Deadline review of the new Borat film I called Baron Cohen “the new-age Peter Sellers.” And indeed he is, an actor with many surprising sides to his talent and the passion that drives it.