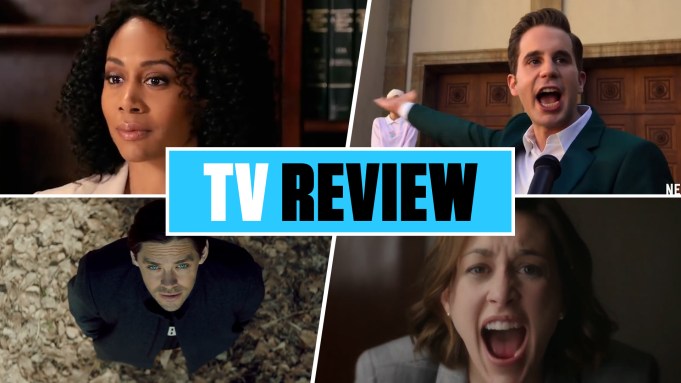 The new NFL season is well underway and the 71st Primetime Emmy Awards have come and gone. Now comes the kickoff of the fall TV season beginning tonight.

With more than a dozen new shows on CBS, ABC, NBC and Fox over the next couple of weeks plus more on cable and streaming, panning for gold in the river of content can be a crapshoot. So, superseding our usual Show You Have to Watch This Week stance, we’re giving you our premiere week picks today and tomorrow.

Tonight, we have three shows debuting and the first offering from Ryan Murphy’s lucrative new-ish deal with Netflix. Which one is a must-see for the new season? You’ll have to watch the video above to find out.

Launching on September 27 on the streamer, the highly promoted The Politician features Ben Platt as Payton Hobert, the adopted son of a wealthy Santa Barbara family who has his sights set on the White House and the high school election that will begin his ascent. In this pursuit, Glee crew and creators Murphy, Brad Falchuk and Ian Brennan have teamed the Tony-winning Dear Evan Hansen alum with Oscar winners Gwyneth Paltrow and Jessica Lange. The eight-episode first-season tale of riches to even greater potential riches and power has some songs, obstacles, and Transparent’s Judith Light and Bette Midler too.

Jimmy Smits is back at his West Wing home NBC in the Caitlin McGee co-starring Bluff City Law, which premieres tonight at 10 PM ET on the Comcast-owned network. The legal drama created by Dean Georgaris and Michael Aguilar revolves around the complex relationship between Smits’ iconic attorney and McGee as his lawyer-daughter. Other facets are added via a family loss and the Memphis-based duo fighting civil rights cases in an increasingly unreceptive America.

Both natural and man-made, the law is a central tenant of Fox’s Prodigal Son, which debuts at 9 PM ET. The Walking Dead vet Tom Payne plays an ex-FBI profiler who starts turning to his imprisoned serial killer father (portrayed by Michael Sheen) for help stopping a copycat. Needless to say, the show created by Sam Sklaver and Chris Fedak finds Payne’s Malcolm Bright now working with the NYPD and alongside a father-figure detective (Lou Diamond Phillips) while caught between his obsessive work, his brilliant biological father’s clutches, his domineering mother (played by Scandal’s Bellamy Young) and the warnings and fears of a way too normal sister (Halston Sage).

In a season full of new legal dramas, CBS’ All Rise takes inspiration from Steve Bogira’s book Courtroom 302 and goes straight to the root with Simone Missick as an outside-the-box lawyer suddenly made a judge in the Los Angeles Superior Court. Starting tonight at 9 PM ET, the Luke Cage alum is joined by Wilson Bethel, Jessica Camacho, Marg Helgenberger, J. Alex Brinson, Lindsay Mendez and Ruthie Ann Miles in this procedural probe into the flawed legal system of 2019.

What’s the Premiere Week Pick of today? Watch the video review about to find out. Also, join us Tuesday for more reviews of both upcoming new shows and one that is leaving us.