Continue to Deadline SKIP AD
You will be redirected back to your article in seconds
Skip to main content
November 16, 2020 5:03pm 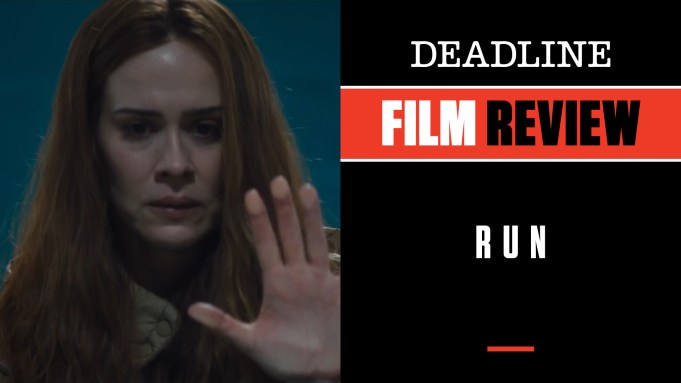 Leave it to Sarah Paulson to ratchet up the nail biting again, this time in a suspense thriller with enough twists and turns to fulfil the needs of a genre that thought it had seen it all.

The real credit for Run in addition to its two talented stars — one the veteran Emmy winner Paulson and the other Kiera Allen, making her film debut — is director Aneesh Chaganty, who co-wrote the screenplay with Sev Ohanian and proves his 2018 computer thriller Searching with John Cho was no fluke. That movie (also written with Ohanian) was virtually (literally) played out on a laptap as Cho’s character desperately searches for his missing 16-year-old daughter. Run also deals with the anxietal relationship between a parent and a daughter, but in this case the 17-year-old girl is not missing, but instead seemingly never able to get out of the sight of an overprotective guardian, her mother, who as it slowly turns out may be up to no good.

At least that is what Chloe (Allen) suspects. She lives a hard life on the surface, paralyzed from the waist down, also a diabetic with asthma and a host of other maladies. The early scenes show the routine of this daughter whose mother, Diane Sherman (Paulson), is overprotective to a fault. We see the daily rituals of taking numerous pills, the home learning without the sake of a laptop or even a phone for her use, and generally being kept in her bedroom most of the time. When Chloe begins to notice Diane may be slipping her a strange medication, her suspicions grow as she secretly avoids taking the pills and tries to prove she’s right.

Her biggest dream is to get out on her own and be accepted into the University of Washington, but increasingly wonders if Diane is making that impossible. In a brilliantly directed and played sequence, she convinces Diane to take her to the movies in town. As the main attraction is going on she excuses herself to go to the restroom, but her real reason is to temporarily sneak out of the theater to go to the pharmacy across the street in order to investigate the prescription she believes Diane has gotten that may cause harm to her in ways she doesn’t quite understand. This really amps up the suspense, especially when Diane shows up before she can get back to the theater.

From that point it becomes a true Grand Guignol thriller, a two-hander, as Diane locks Chloe in her bedroom and takes her obsession to new levels. Another masterfully executed sequence basically asks the question, how does someone who can’t walk attempt to free herself by navigating the route outside her second-story window to another room in the house? There are twists to come that try to explain the motivations of Diane, and some nifty turns of events. Paulson knows her way around this kind of character; certainly her time in American Horror Story and the current Ratched make her ideal casting and she doesn’t disappoint, throwing everything at the wall and making it all stick. Counter to that, Allen makes an impressive debut in a physically difficult role of a not-so-helpless victim that she pulls off with skill.

Chaganty presents it all in a style of which even Hitchcock would approve. In a way it reminded me of another two-hander, Misery, in which Kathy Bates won an Oscar for keeping the innocent James Caan trapped and terrified. But Run runs with its own rhythms and further announces Chaganty as a major talent. Producers are Ohanian and Natalie Qasabian. It begins running on Hulu on Friday.

Check out my review in the video above with scenes from the film. Do you plan to see Run? Let us know what you think.