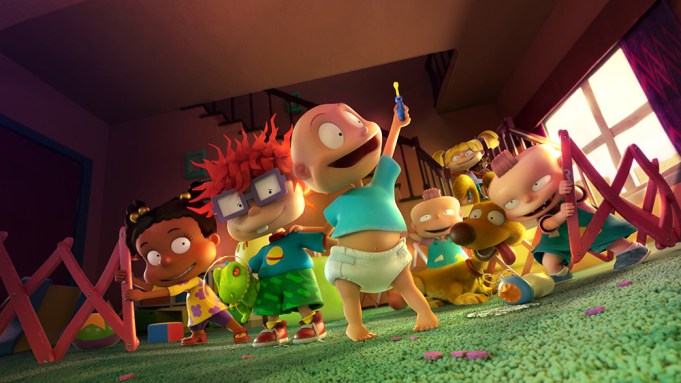 The Tommy Pickles, Chuckie Finster and the rest of the Rugrats gang are back for more fun in the trailer for Paramount+’s revival series.

On Wednesday, the Paramount streaming service dropped the latest look at the reboot of the Nickelodeon original series created by Arlene Klasky, Gabor Csupo and Paul Germain. The series’ tiny tots embark on an Indiana Jones-inspired treasure hunt, a battle against a giant green dog and a high-speed car chase in the colorful, wild worlds of their imagination. Watch the trailer above.

Also joining the cast for the revival are Nicole Byer, Tony Hale and Natalie Morales, who will take on the adult roles in Paramount+’s revival. Hale will play Chuckie’s father, Morales as Phil and Lil’s mother and Byer, with Omar Miller, as Susie’s parents. Ashley Rae Spillers (Vice Principals) and Tommy Dewey, as Tommy’s parents; Anna Chlumsky and Timothy Simons, as Angelica’s parents; and Michael McKean, as Grandpa Lou Pickles round out the voice cast.

Paramount+ also dropped key art, which can be viewed below.

The all-new Rugrats is based on the series created by Arlene Klasky, Gabor Csupo and Paul Germain. Eryk Casemiro and Kate Boutilier are executive producers and Dave Pressler and Casey Leonard serve as co-executive producers, with Rachel Lipman as co-producer. Production is overseen by Mollie Freilich, Senior Manager, Current Series Animation, Nickelodeon.