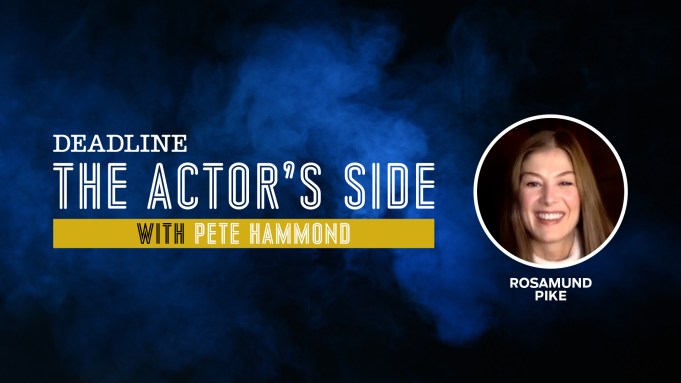 There is no doubt Rosamund Pike is one of the finest actors working today, and two concurrent films prove it. She joins me for the latest edition of my Deadline video series The Actor’s Side to discuss her latest roles in Amazon Studios’ Radioactive, in which she plays the two-time Nobel Prize winner Marie Curie, and in a completely opposite kind of role as an unethical and ruthless legal guardian in the dark comedy I Care a Lot, which debuted to raves at the Toronto Film Festival and debuts February 19 on Netflix.

Pike talks about her career including her notable early stint as a Bond girl  opposite Pierce Brosnan’s 007 in 2002’s Die Another Day, albeit a very smart one since as Pike says she may be the first Bond girl to have graduated from Oxford. She also talks about her life-changing Oscar-nominated role in the enormous hit thriller Gone Girl, plus early lessons in acting including one piece of advice at age 19 that she says she carries with her every single day on every single job.

On playing Curie, Pike says the film was as much a biopic about radioactivity as it was about Curie, and notes the difference Hollywood had previously treated male genius figures versus female ones — the latter she says are often referred to a “a bit of a bitch,” which she thinks is more about the viewer than, in this case, Curie, who was too busy changing the world to even care. For this film she also discusses the scene she could only play once, an emotional moment she was “terrified” to do.

That brings us to the very different I Care a Lot, for which you will see a previously unseen and exclusive first look of Pike as the lethally charged Marla, a no-nonsense businesswoman who preys on the elderly and profits by their, um, incarceration in horrible living conditions in nursing homes. It’s certainly timely, and wickedly funny in its very dark way. Pike talks about the big business of health care, and how this scenario takes that to the extreme.

She said when she saw The Wolf of Wall Street she wondered why no one was writing roles like that for women, but with I Care a Lot she believes her prayers were answered with as juicy a role as they get.

In the edited version of our interview at the top of this post, we open talking about that James Bond experience, but to hear more detailed conversation about that, as well as the entire half-hour interview, check out the video below.