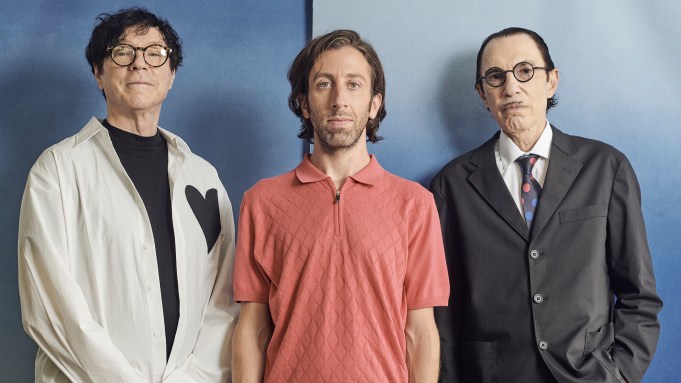 “So may we start?” asked the teaser trailer for Leos Carax’s anarchic musical Annette, which proved to be an ebullient, if divisive, introduction to the 74th Cannes film festival. Starring Adam Driver and Marion Cotillard as two ill-fated lovers—one a comedian, the other an opera singer—the film chalks up another big-screen victory for U.S. band Sparks, recently the subject of Edgar Wright’s crowd-pleasing Sundance entry The Sparks Brothers.

When Sparks, AKA Russell (singer) and Ron (keyboards) came by the Deadline studio, they revealed that the project had been in the pipeline for quite a few years, and was actually inspired by a visit to the Cote d’Azur in 2012. “This is actually the second time that Ron and I have been to Cannes,” said Russell. “We actually met Leos Carax here eight years ago. And that was kind of the starting point for this. We had finished this project called Annette that we had thought was going to be Sparks’ next album, a narrative project. We had finished that a year earlier, and then came to Cannes and we were introduced to Leos, who had used one of Sparks’ songs [How Are You Getting Home?] in his last movie, Holy Motors. And we got along really well with him. We thought there was a kind of kindred spirit there—what he does with his movies is what we do with our musical world. So we sent it to him, just as a matter of interest, not soliciting anything or expecting anything. But he listened to it and, and he said, ‘This is pretty amazing, let me think about it a while.’ Two weeks later, he got back to us and said, ‘I’d really like to direct this as my next movie.’ And so it transformed from being a Sparks album into being the opening film of Cannes.”

Ron, thankfully more chatty than his stage persona suggests, explained that Carax took a hands-on approach from converting what was essentially a concept album into a feature. “He made it very clear from the beginning,” said Ron, “just because he’s such a personal filmmaker, that he would want to inject some of his own sensibility into the film. But the basis of it, and most of the pieces, were things that were there nine years ago. He felt partially that, since it originally was a theatrical piece, the characters could be more well-rounded and more cinematic … Then he requested a few new pieces to be written, which we did. But we have no misgivings. I mean, obviously he’s a great filmmaker—the visual side of it that he brought was astounding and surprising in so many ways to us.”

To hear more from Sparks and actor Simon Helberg, watch the video above.