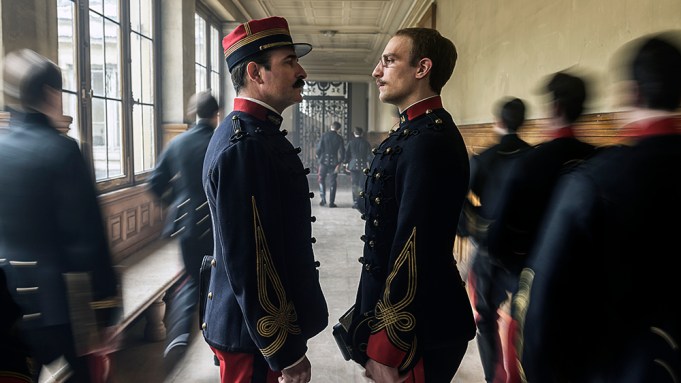 Here’s first footage of Jean Dujardin (The Artist) in Roman Polanski’s Venice Competition title An Officer And A Spy.

The French-language film, which debuts on the Lido today, charts the story of the notorious, anti-semitic 1894 Dreyfus Affair in which a Jewish officer in France was wrongfully convicted of treason and sentenced to life imprisonment. The big-budget movie (estimated around $28M) also stars Mathieu Amalric, Polanski’s wife, Emmanuelle Seigner, and Louis Garrel.

Producer is Alain Goldman (La Vie en Rose) at Legende Films, in co-production with Casanova Multimedia and Rai Cinema. Script comes from Robert Harris. The film has been well-sold around Europe by French sales outfit Playtime.

The festival is only a couple of days old by it has already been dominated by talk of director Polanski. The filmmaker won’t be at the festival or doing general press but did give a strikingly candid, wide-ranging interview for the film’s press notes.

In the interview, 86 year-old Polanski discusses his motivation for making An Officer And A Spy, his experience in the MeToo and Times Up era and the enduring trauma of his wife Sharon Tate’s murder.

“Big stories often make great films, and the Dreyfus Affair is an exceptional story,” Polanski says in the notes. “The story of a man unfairly accused is always fascinating, but it is also very much a current issue, given the upsurge in anti-semitism.”

Oscar-winning filmmaker Polanski remains a controversial figure due to his arrest in 1977 for drugging and raping a 13-year-old girl. He pled guilty to the lesser offence of unlawful sex with a minor and served 42 days behind bars but has been a fugitive of the U.S. ever since, having fled the country after learning that a judge planned to give him a lengthy sentence. His victim Samantha Geimer has subsequently said she has forgiven the French-Polish helmer and accepted a private apology.