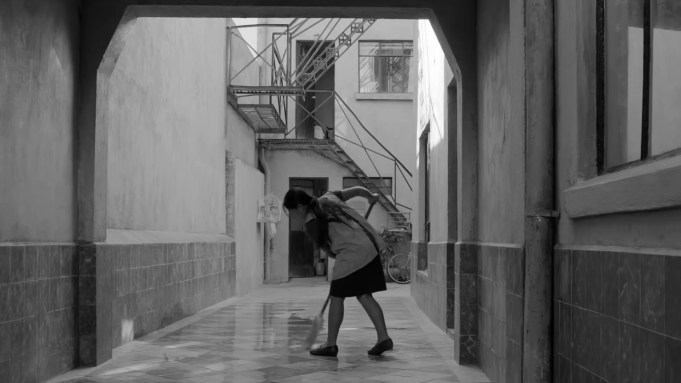 Ever since winning the Golden Lion at the Venice Film Festival in September, Alfonso Cuarón’s most personal film Roma has been widely, and justly, acclaimed, not only for its content but also for breakthrough cinematic techniques the director has perfected in this wide-screen, gorgeous-looking black-and-white memory play. It is a movie designed for cinemas and should be seen that way, but it was also sold to Netflix by Participant Media, which produced it. It debuts in streaming form today, and will necessarily be seen by most viewers within the confines of a TV set — or even (God help us) laptop.

Hopefully it will have the same emotional impact no matter how you watch it, but just to sit in a Dolby Atmos-equipped theater and hear the extraordinary sound design Curarón and his excellent team of artisans have crafted is to validate the whole idea of the moviegoing experience, even as it ironically debuts on your home set. Since this is a very intimate, personal experience — a movie that charts Cuarón’s memories of childhood and, in particular, the nanny named Cleo who helped raise him and his three other siblings — the power of this memory play likely won’t be lost no matter how you find it. I am told it is simultaneously being seen in about 600 theaters worldwide, marking the largest theatrical launch yet for Netflix, which has found much resistance from exhibitors due to the streamer’s day-and-date release policy. How long it keeps those screens is a larger question, but in the name of serious cinephiles let’s hope people get to see this film in the format of their choice. This is all still a grand experiment in many ways.

After making the Oscar-winning and worldwide box office hit Gravity, Cuarón could have chosen to do anything in the world of film, but this was clearly a dream project. And so five years later we finally have it. The story behind its meticulous craftsmanship is something to behold (Cuarón also served as his own cinematographer and co-editor in addition to writer, producer and director), but it is also the way he plays with his own memories in bringing an integral part of his life to filmgoers. He has outfitted the family home with some of the actual furniture, as well as items that were there exactly as he remembers them in 1971, when the film is set in the upper-scale Mexico City neighborhood called Roma.  This is not a film that is really heavily plot-driven, but one made of moments (at least at first), everyday activities in the life of his family, and the women who served them, primarily Cleo (Yalitza Aparacio) and Adele (Nancy Garcia Garcia).

Keep in mind Cuarón takes his time setting up this world for the viewer. There are many scenes of water, and mopping, and other things of life to get us in the mood. We slowly meet the mother, Sofia (Marina de Tavira), and father, Sr. Antonio (Fernando Grediaga), and eventually discover trouble in the marriage — dad is a philanderer and not a sympathetic father figure to be sure. The kids are lively, but the focus interestingly is not on Cuarón’s counterpart child, but on the women who shaped him — including Sofia but most especially Cleo,  whom non-professional actor Aparacio inhabits with almost an ethereal silent film quality. The fact the movie is shot in black and white only enhances her performance in that way. We also see her in her own life with, as it turns out, a good-for-nothing boyfriend named Fermin (Jorge Antonio Guerrero) who at first courts her, gets her pregnant, and then unceremoniously dumps her in the middle of a movie date when she reveals they are expecting a child. Later she confronts him as he trains for a student riot that becomes a key element in the latter part of the movie, and it is heartbreaking to see what this does to her as she prepares to have a child alone.

In fact, the second half of the film, which incorporates those riots in the streets of the city as well as other harrowing moments in the life of Cleo, is not always easy to watch, but Cuarón is painting a larger picture than the everyday life the film so beautifully reimagines — right down to the family dog who provides many  of the lighter moments of this film. As a movie that recalls specific time and place, a film from the heart, it is not hard to see why Roma has made such an impact on the festival circuit.

Among his many accomplishments here, Cuarón has gotten impeccably real and fine performances from Aparacio, Garcia and Grediaga, as well as the young actors playing the children, none of whom have ever acted before. If there is an Oscar for casting this would win it. De Tavira is the true pro in the cast, an accomplished Mexican stage star who shows why she has succeeded in her profession. Shot in chronological order with a script that was kept secret even from key crew members, this is a very unique work from a master of the form, and is well worth seeing however you may find it. Streaming begins today on Netflix. Roma is Mexico’s official entry into the Oscar Foreign Language Film category.

Check out my video review above. Do you plan to see Roma? Let us know what you think.