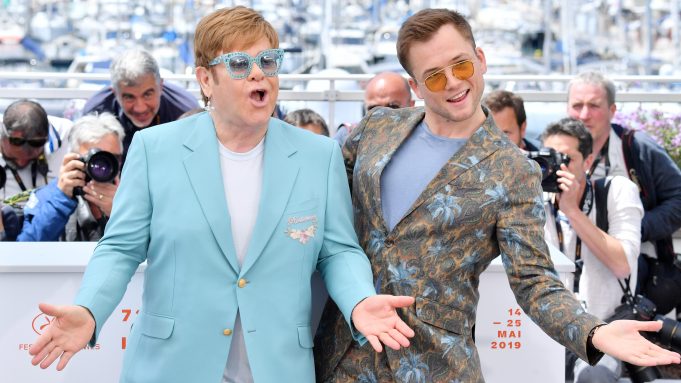 Typically when a rock star or his estate is heavily involved in the production of their auto-biopic, they take the safe way out, diluting what really occurred offstage.

Not Elton John who is an EP on Paramount/Marv Films’ Rocketman. He gave star Taron Egerton and director Dexter Fletcher full reign to deep dive and show the underbelly of his life.

Some who haven’t seen Rocketman ask, ‘How do you make a biopic about a performer who is still alive?’. However, with Rocketman, the movie’s arc is in the climb, deep fall and redemption of John as he struggles with a dismissive father, the excess of drugs, as well as his struggle to be fully out as a homosexual.

Here in our Cannes interview with Fletcher and Egerton they provide insight as to how the actor slipped into the skin of the feather-clad musical legend and gained access to him, and his diaries.

Throughout it all, producer Matthew Vaughn was the glue to getting this Eddie the Eagle director-actor-combo attached to Rocketman. After the sharp-witted sports movie about an underdog British ski jump didn’t dazzle at the B.O. with a global gross of $46M, Vaughn believed and knew that Fletcher could deliver a Fellini-esque musical fantasy sensibility to John’s story. It was Vaughn who suggested Egerton to John and husband/Rocketman producer David Furnish. After all, the actor did a sublime cover of John’s “I’m Still Standing” as Johnny the Gorilla in Illumination’s Sing. It was also Vaughn who suggested to Fox that Fletcher rescue Bohemian Rhapsody. In Vaughn’s mind, it was a perfect warm-up for the director prior to Rocketman.

Rocketman was an unforgettable, magical moment at this year’s Cannes, as the Carlton Hotel was where John shot the video for 1983’s “I’m Still Standing”. It was an uncanny, wonderful moment for the audiences last week to watch a replay of the video onscreen, then leave the Grand Lumiere Theatre and watch John perform the song on the Carlton Beach. Since departing Cannes, Fletcher and Egerton have traveled to Sydney and London for premieres with John in attendance at the latter. Paramount’s Rocketman opens on May 31.